6 Fixes For A Car Door Not Opening From Inside

by Ralph ￮ March 28, 2022
'6 Fixes For A Car Door Not Opening From Inside' via United Locksmith
https://unitedlocksmith.net/blog/6-fixes-for-a-car-door-not-opening-from-inside
UnitedLocksmith,Locksmith,Automotive 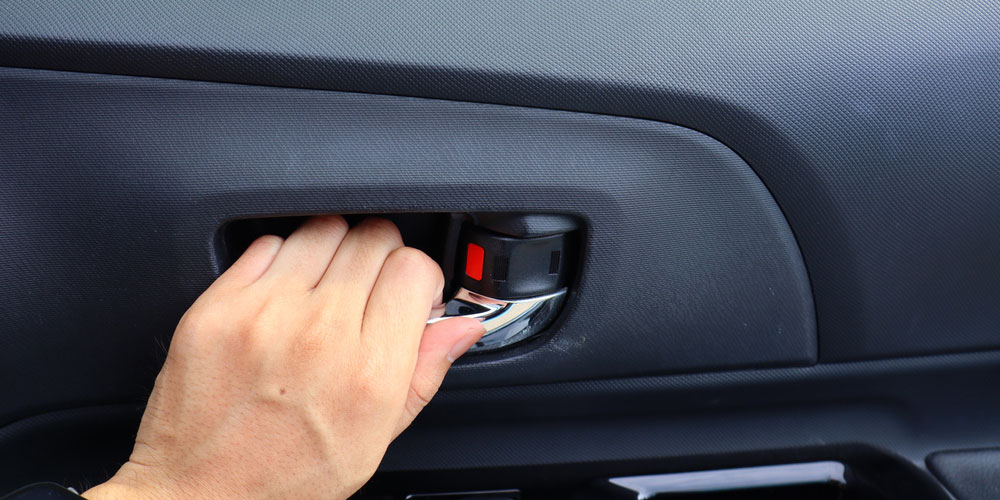 Most people worry about thoughtlessly locking keys in a car, but sometimes a door won’t open from inside the vehicle. Rather than being locked out of your car, you can get locked inside your car. Even if you can get out through another door, this is still a problem you want to fix.

The basic ways to fix a car door not opening from inside require an understanding of:

Why is my car door not opening from inside?

When a car door won’t open from inside, you can rule out certain causes, such as a broken car door lock cylinder, which would only affect opening the lock from the outside. The problems you could be experiencing range accidentally triggering child locks to a damaged lock assembly.

How do I unlock a car door that won’t open from inside?

Try all available methods to unlock the car, including switches, handles, and even the unlock button on your car key remote. If all else fails, exit through a different door and open the door from the outside. When a car door won’t open from inside or outside, further steps are needed.

What is the cost to fix a door that won’t open from inside?

The cost to fix a car door lock depends on the price of replacement parts and labor. But when a door won’t open from inside, the solution could require no new parts and minimal non-complex labor such as turning off a child lock. General car door lock repair services start at $120.

Does a door not opening from inside mean the lock is broken?

Just because a car door won’t open from inside, it does not mean the lock is broken. Engaged child locks, freezing, and rust are all examples of causes for a door not opening from inside without any part of the lock breaking. In some cases, even disconnected parts are not broken.

Can I lock my car if my door is not opening from inside?

It is risky to relock your car when the door won’t open from inside. While the lock still has some functionality, keep the door open so you can fix the lock. A door that is not functioning properly can worsen very quickly, changing a problem you could solve yourself into something that requires a car locksmith.

Troubleshooting A Door Not Opening From Inside

Isolating your issue is one of the most important steps in diagnosing the reason for a car door not opening from inside. To get a sense of the issue’s scope, investigate the various ways you would normally be able to open a car door from the interior.

Manual Locks – Your post locks, buttons, or switches are stuck in the lock position. They cannot be pulled or physically manipulated into moving to their unlocked state. If the manual locks can move into their unlocked state, but the door still won’t open from the inside, check the handle.

Handle – It seems like your manual buttons are in the unlocked position, but the handle isn’t working. Either the handle is stuck or it moves freely without the door opening. Either way, try to open the car door from outside. If the handle or key works from outside, there is likely something wrong with the interior handle and not the lock.

Electronic Button – The electronic buttons within your vehicle, which remotely lock or unlock all interior doors, are fully or partially inoperable. Whether one, some, or none of the interior locks are responding speaks to a problem with either the electrical or the car door lock assembly.

Key Remote – When you press the unlock button on your key fob and the door won’t open from inside, this is not necessarily a sign of a car remote not working. Will the locks remotely lock but not unlock? If the remote has some control over at least one lock, the remote is not the issue.

With an understanding of what elements of the door won’t open from inside, you will be able to rule out certain causes for the issue. If your door or vehicle is experiencing problems beyond the door not opening from inside, look for answers beyond what follows.

Modern cars have child locks on the back doors. These types of locks will not be found on the driver’s side or front passenger doors. If a front door won’t open from inside, it is almost certainly not the result of a child lock unknowingly being engaged.

Unwittingly activating child locks can happen while getting out of the vehicle or holding the door open. Sometimes children will fidget with the switch when the door is open. But things will organically brush up against the lock accidentally.

If your car is not in a location with temperatures that have recently dropped below freezing (32°F), then you can rule this out as the cause of a car door not opening from inside. Whatever is frozen will not move at all or not move fully, as if it is jammed.

Often ice will form on the door, which prevents it from opening generally, but freezing can also create more isolated issues. Internal components on the door lock assembly can freeze just enough so a door won’t open from inside.

Freezing will be almost indistinguishable from jamming caused by rust or debris, but the cold weather and suddenness of this issue hint toward ice. Rust and debris should cause a more gradual loss of reliable functionality.

The traditional way to open a frozen car door is to apply an ice removal product or substance with a lower freezing point than water as directly as possible to the ice. With the ice inside the door, this requires the door to be taken apart, or you can try jiggling any of the lock actuators back and forth to try and break up the ice.

The door lock assembly of an automobile is a series of interconnected levers and actuators. Sometimes these parts disconnect so a car door won’t open from inside the vehicle. Connections can slip slowly over time due to use or suddenly due to a crash or impact.

Though this issue can feel like a sticky car door lock, it is the opposite. Something has come loose rather than something getting held up, but it can be extremely difficult to diagnose this without taking the paneling off the door and exposing the lock assembly.

Open up the door, remove side paneling, and with the door lock assembly exposed, actuate the lock. See what is moving and look for what should be connected to the moving part. Reconnect the pieces. If reconnection requires tape or welding, then you should refer to the section on breaks.

Depending on what has broken and how it has broken, the problem will present itself differently. Diagnosing what broke so a door won’t open from inside the car, will require you to look at the exposed assembly and investigate.

With the door panel off, you can use the various interior locks and see what isn’t moving. Follow the connections along and look for what is missing or visibly broken. Things may be dangling as if they have been disconnected, but reconnection fails due to broken connections.

The basic process of how to fix a car door lock is to try and replace only what is broken. Finding parts can be difficult, and in some cases, parts of the assembly have to be purchased as a set. Purchasing and installation can be handled by a professional auto locksmith.

Deadlocking is a security feature used on many luxury brands and specific high-end models. If your door won’t open from inside the vehicle, no matter the door you try to use, you may have engaged the deadlock. This will make it so locks will not work manually or electronically.

You can activate your car’s deadlock without realizing it through how you remove the key from the ignition or by pressing the buttons in a certain sequence. Deadlocking a car may be as simple as hitting the lock button twice on the remote.

Hopefully, whoever is in the car when the door won’t open from inside has the key. A working key is required to deactivate most deadlocked cars. Just insert the key in the lock, ignition, or use the remote. If your vehicle is deadlocked and you are outside of it, how to break into your car gets significantly more complicated.

Oxidized metal, more commonly referred to as rust, forms on almost every metal service. This substance keeps parts from moving, jamming up connections, and filling gaps needed for parts to slide past one another.

If rust is the reason a car door won’t open from inside, whatever actuator you are interfacing with should not move. Rust will jam a lock over time, so you may have noticed it was getting harder to flip your lock switch or pull a handle.

You can begin by spraying a bit of door lock lubricant into the surrounding crevices of the lock that isn’t moving. With some lube, it will even allow you to wipe away rust. But cleaning and polishing to prevent future rust accumulation will require you to access the interior lock assembly through the removal of the door paneling.

It can be difficult to detect why a door won’t open from inside. But figuring out your issue is the only way to solve the problem. If you need assistance with diagnosis or service, call an automotive locksmith. And if you have any general questions or thoughts, leave a comment below.