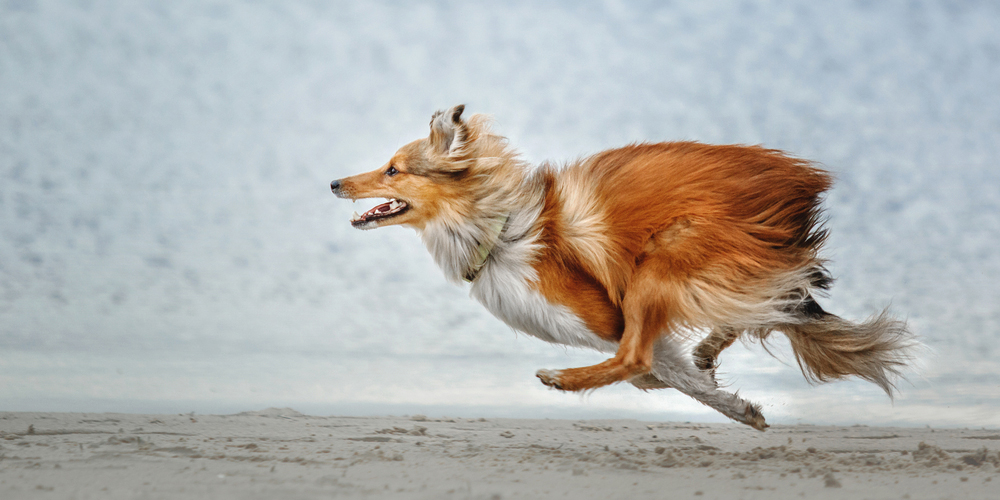 Most animals have the natural athleticism needed to overcome most security measures. However, not every animal is a natural escape artist. Cows can be kept from wandering off by just putting up fence posts without fencing, and they would not be able to escape down a flight of stairs. Other than physical ability and mental faculties, you have animals with an unwillingness to escape. For example, giraffes. If you have ever been to a giraffe cage you know giraffes do not have the tenacity or drive to escape, they are content in confinement. The best animal escape artists have the means for escape, the drive, and a proven track record of impressive escape artistry. 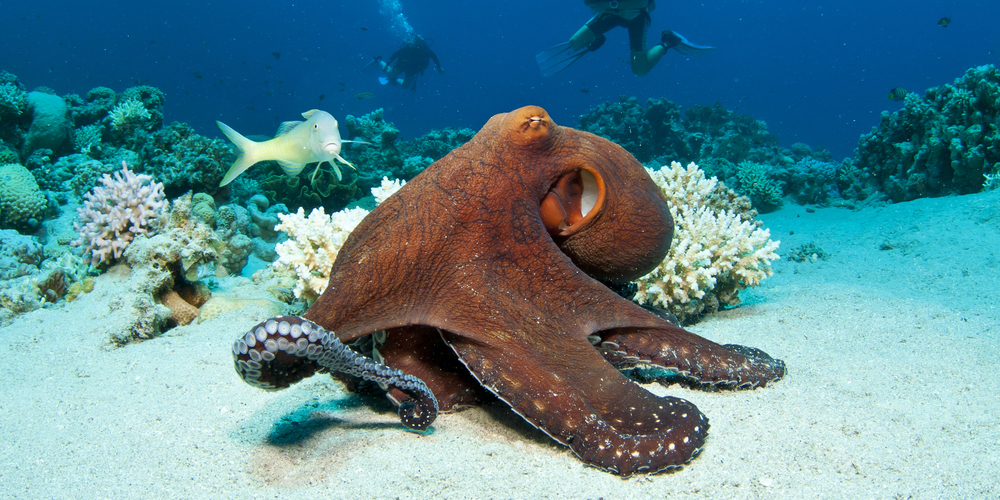 The octopus is an animal without bones, or any air bladders or gas pockets. This evolutionary adaptation has allowed octopi (or octopuses) to avoid imploding at the extreme depths of the ocean. An expected result out of this is that they can force their entire body through any opening large enough for their beak (the only truly solid part of their anatomy). For a little bit of context, that means that a 200 lbs octopus with a 1-inch diameter beak can fit through a hole only a little larger than a quarter.

So with that type of ability alone, the octopus would deserve a place on this list, but there is more that makes this aquatic creature a formidable escapist. Octopi are incredibly intelligent, able to solve puzzles and manipulate objects to complete tasks. They can open jars from the inside and learn how devices work through trial and error, then remember these methods and apply them later. But wait, there’s more! If an octopus has not had the time to learn something by experience, they can simply watch another octopus complete the task and internalize that visual information. The octopus can figure out how to escape itself, with help, or just by finding even the smallest hole. Good luck keeping this animal confined. 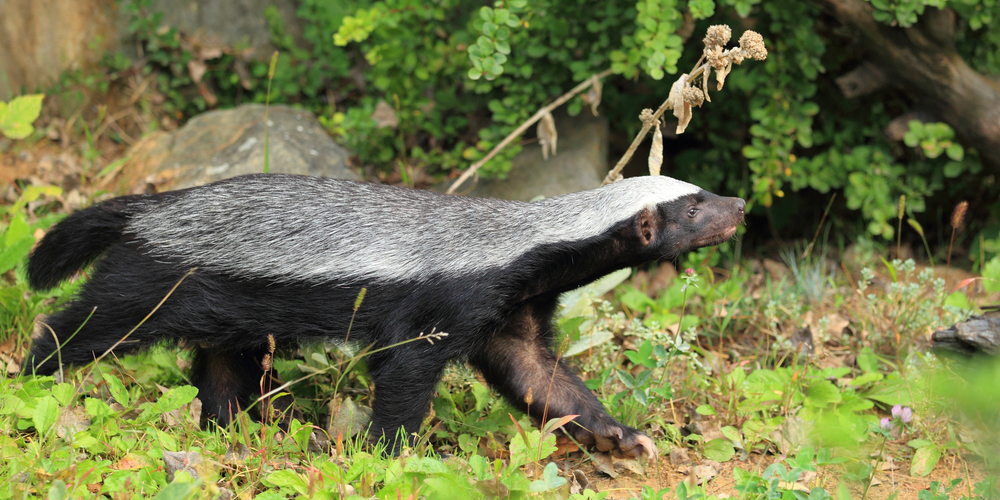 Honey badgers and the scourge of anyone that wants to keep their honey safe. Beekeepers have gone to great lengths to protect their hives. This is all due to the industrious and resourceful nature of the honey badger. Where beehives end up in nature can be in the most remote and inaccessible locations, so this animal has adapted to be able to not only climb anything but also build tools to help it get a leg up. This ingenuity has led to a penchant for escaping any confinement, no matter how sparse or complex.

Honey badgers also work collaboratively. Pairing with a partner both the animals can assign tasks to undermine more complicated security measures. They are expert climbers with powerful front arms and razor sharp claws, which also double as amazing digging tools, perfect for burrowing escapes. Some of their more complex strategies include unlocking bolted doors, wound wired fasteners, dual locking mechanisms, etc. With very few resources for escape, they have figured out how to pile rocks and even mud in order to climb out of enclosures. These creatures are forces of nature, and wherever they are placed, escape is imminent 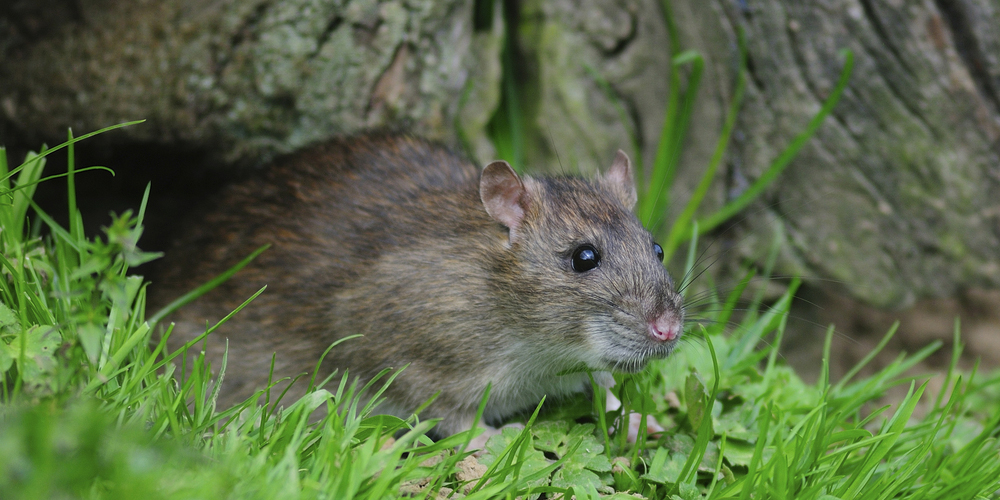 The brown rat has a mixture of intelligence and physical ability that makes escape somewhat second nature. Their burrowing nature has created a physiology perfect for getting in and out of some of the tightest predicaments. Their body shape is long and cylindrical, and when assisted by their innately flexible form, they have the capability to fit themselves through gaps only seemingly large enough to put their skulls into. Even an escape that is perilous for most animals is not out of reach for a rat, who can survive without water for longer than a camel. They are known for escaping sinking ships with their incredible swimming prowess and might be able to get to shore without being tempted to sip that salt water.

Not only do they have the physical ability to escape, but they also are extremely social animals, able and extremely willing to learn from more experienced rats. Brown rats have incredibly good memories, perfect for knowing which strategies have worked or failed in the past. And in spite of popular belief, rats also have very good vision, being able to recognize three-dimensionally represented images even as they move to different angles. They can even recognize a rat who is on television. With their vision and memory, getting through complicated mazes and obstacles can be overcome given enough time. And with their physical makeup, speedy escapes through almost any opening are always a possibility. 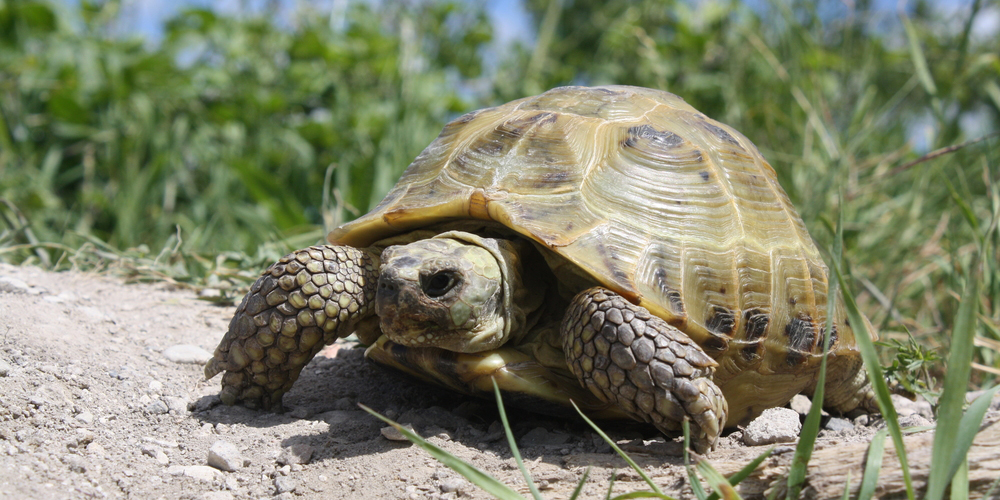 Russian tortoises will simply keep trying to find a way out until they are successful. They have patience and determination mixed with the ability to go over and under the obstacles in their way. One of their keys to escape is how unprepared people are for their rather unorthodox skills. Almost no one expects a tortoise to be able to climb seemingly ninety-degree walls, appearing to do pull ups with its incredibly strong front legs. Determination and unlikely ability make this animal a great escape artist.

Any dog owner will attest to the fact that they have gone through the trouble of escape-proofing their home. Canines are extremely curious and highly athletic. The resulting concoction is an animal primed to escape. When it comes to digging, a dog can dig deep and fast. They also work smart, only digging deep enough to fit through a gap underneath a fence or a gate. Depending on your dog bread there are many types of escape attempts that a dog might use. Larger dogs have the ability to jump over objects as tall (and sometimes taller) than six feet. There are also many dogs that have figured out how to climb chain link fences.

With a range of intelligence and physical ability, dogs have figured out what type of escape attempts work best for them. Often these methods are not learned or taught from human masters or other dogs. Escapes are often flooks that can be fine-tuned into a repeatable method, but sometimes they are achieved through pure ingenuity. This disparity in skill sets between specific dogs, even within the same breed, makes anticipating necessary enclosure parameters very difficult. The variety in athleticism and intelligence makes keeping these animals confined an arduous task. A dog can be part of your security, but if you aren’t up to the task of keeping them from escaping, you might want a security system and not a dog. 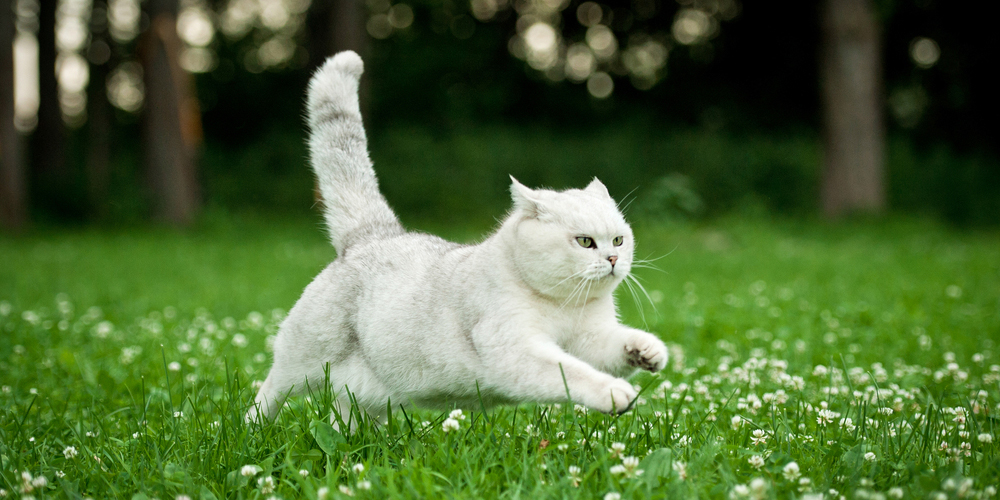 Most people know that it is almost impossible to get a cat to do something you want. And that if a cat does not want to be your pet, it will find a way to get out. This fact is so widely accepted that most people do not even try to keep their cats confined. A cat can scale fences of pretty much any size. They can also climb trees if that is simpler than getting over a fence. Cats also seek out holes, crawling under structures and entering almost any type of building. The same way they get in, they often get out.

Cats are also extremely flexible, which allows them to slink through tight spaces in order to make paths and get past security measures. They are largely fearless in terms of the lengths they will go to get out. Sometimes this leaves them stranded, but sometimes a cat that appears stranded is just being its normal unmotivated self. What makes cats such good escape artists, are their strengths as animals, but also their desire to get away from the confines of captivity. They escape as second nature. 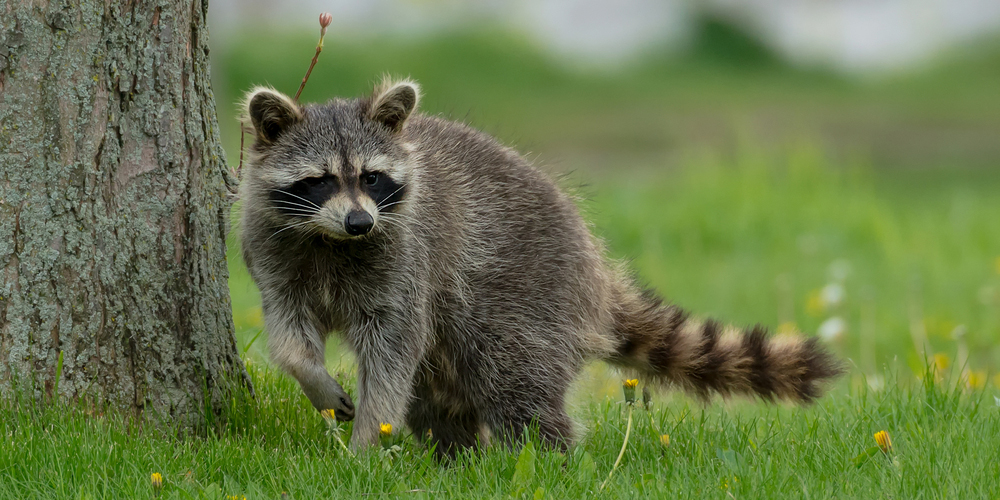 If you have ever tried to keep a raccoon in or out of anywhere, then you might know how industrious these creatures can be. Looking online or checking experts for insights on how to handle raccoons will show you just how intelligent and crafty nature’s burglars can be. Raccoons are often very brazen with their break-ins and breakouts. They are not alarmed by loud noises or scared away by motion sensor lights. In fact, specially made sprinklers that spray raccoons with no warning will still not discourage whatever course of action they have chosen.

Electric fences are circumvented or even shorted out by these ingenious creatures. But in very extreme cases, some raccoons will take the shocks and attempt to still climb the fence. They will put up with all kinds of uncomfortable situations, just to do what it is they want. For example, they do not like water, but they will get wet and except the bother just to get around your security. They are extremely hard to discourage, and almost impossible to outsmart. Raccoons are truly masters of security and escape. 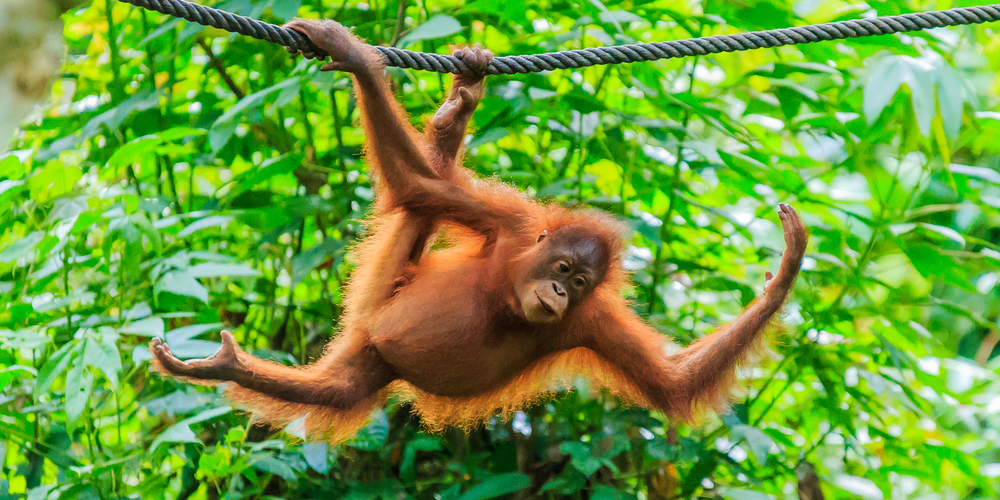 The orangutan is one of the most intelligent species of primitive primate. It matches the cognitive abilities of chimpanzees and gorillas, but it would seem that they have a skill set more fine tuned for escaping than their other simian counterparts. Orangutans in captivity and the wild have a strong proclivity for refined and advanced tool making. With simple tree branches, orangutans can construct devices that allow them to better scratch themselves, scrape at objects, wipe away residue, sponge liquids, swat flying insects, fan themselves, hook out of reach objects, probe tight spaces, scoop up liquids, pry things apart, chisel, hammer, cover, cushion and amplify.

Orangutans come up with new tools by themselves (as they mainly live solitary lives), but they are also sensational learners and choose to teach their offspring (given time to discover tips and tricks during their protracted childhoods). Some of these tools are used to facilitate escape. There have been a few high-profile instances of orangutans escaping from their enclosures at Zoos. In one case an orangutan used a bypass method on a door after forcing a gap with its tremendous strength. The orangutan in question would hide the wire used for the bypass in his mouth to avoid detection and to free up his hands as he went through the ventilation shafts. In other cases, orangutans have avoided video surveillance and even direct observation, creating distractions and keeping a low profile during observation. This led the Zoo in question to take up so pretty crazy security plans.

Through knowledge and patience, electric fences have been overcome during instances of power failures. These animals know how and when to escape, and how to cover their tracks, so no one knows how they are doing it. Their tool making ability, when paired with their long arms that can exceed a reach of over eight feet (longer than most full-size human bodies), allow them to access supplies needed for escape. Orangutans will often hold tools in their mouths to free themselves up to have the full range of motion their expert acrobatics abilities provide them. It seems like something you would expect from the species with the closest genetic makeup to our own.

You will have a hard time keeping anyone of the animals on this list locked up. These animal escape artists know what it takes to get out of even the most secure locations. Keeping them in, or keeping them out, will be quite the task. These animals are not as content as giraffes. They have the intent to escape. The awareness of their restricted freedom, and the kind of determination to make sure they are free. None are as sophisticated an escape artist as the human locksmith, but we can’t all be locksmiths.