How To Stay Safe At A Donald Trump Rally

by Ralph ￮ July 5, 2016
'How To Stay Safe At A Donald Trump Rally' via United Locksmith
https://unitedlocksmith.net/blog/how-to-stay-safe-at-a-donald-trump-rally
UnitedLocksmith,Locksmith,Crime 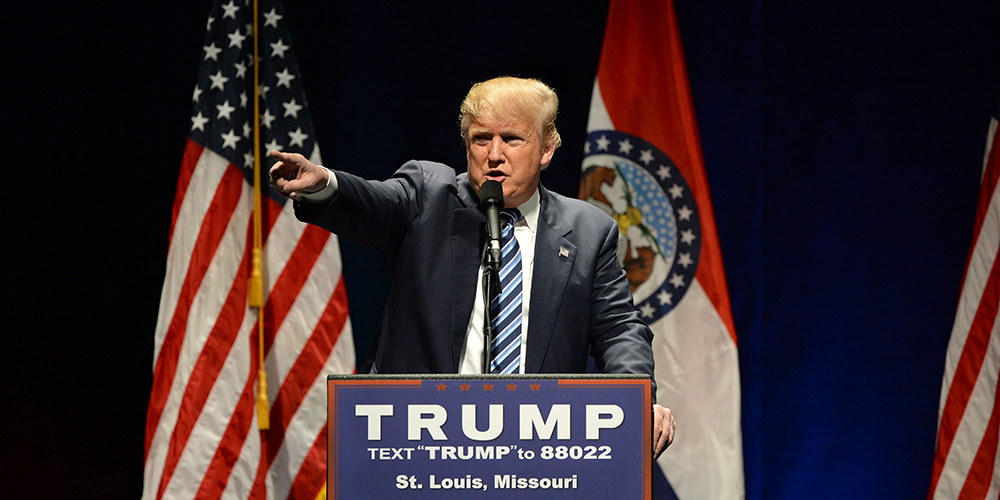 Strong opinions lead to strong oppositions. These personally held ideas are never so strongly voiced or decried as they are during a campaign season. With a two party system (as unofficial as it is) there are usually a lot of heated arguments. Lately, this fundamental differing has resulted in a lot more than words. People are getting hurt while attending campaign events. Specifically, they are getting injured when they attend a certain candidate’s events. I am of course talking about Donald Trump. Now you may want to go to one of these rallies in support, protest, or just to hear what he has to say. On the Lock Blog, we are not here to talk politics. We are here to keep you safe. To do that, there are some things that you need to know before you head over to the next Donald Trump rally.

In order to stay safe, you need to look out for the specific threats that you are facing. Firstly we will differentiate between disruptions and violence. Trump’s detractors do show up to his rallies very regularly to voice their opinions about him and his stance on particular issues. When these people speak up, this is not violence. Yelling, and even screaming, is not something that endangers your safety. The violence that happens at these rallies happens when words are not enough for individuals.

The types of violence that breaks out is mainly hand to hand, with the occasional report of using a sign as a weapon. Punches, kicks, shoves, etc., have been used against protesters inside the rallies, and supporters outside of the event building. Event security has been shown to remove protesters roughly with the use of chokeholds, as most security does. Law enforcement will, and has used pepper spray to control the crowds. In the instance of April 26th in Anaheim, a protester and supporter both used pepper spray on one another. Outside protesters have damaged property and even injured people with objects they lit on fire.

One of the biggest questions is who is creating all of the violence? The media goes back and forth on this, claiming that Trump supporters are responsible for instigating the violence, but others look to the Trump protestors as the source of violence. The most balanced perspective would show that innocence does not rest in the hands of any one party. Not even security or law enforcement is exempt from perpetuating the harmful behavior. It is easy to say that no one is innocent but more accurate to say that this type of wrongdoing is due more to individuals than any group.

The greatest chance of having a violent interaction seems to be outside of the rally. This is where the event security cannot intervene effectively, and the point at the rally where the greatest amount of people with differing opinions are exposed to one another. Tensions can be high, and the public aspect of the gathering allows anyone in the area to get involved. When anyone can join the fray, escalation cannot be easily controlled. Whereas an event will have a specific number of people who are allowed to enter.

There are many different ways to stay safe from violence. It would be quite simple to say, don’t go to these rallies. You could avoid these situations by never taking part in them. But that is a different article. Whether you are a protester or a supporter, this article is for people who have decided to publicly make their opinion known, as well as those that just want to go and see him speak. 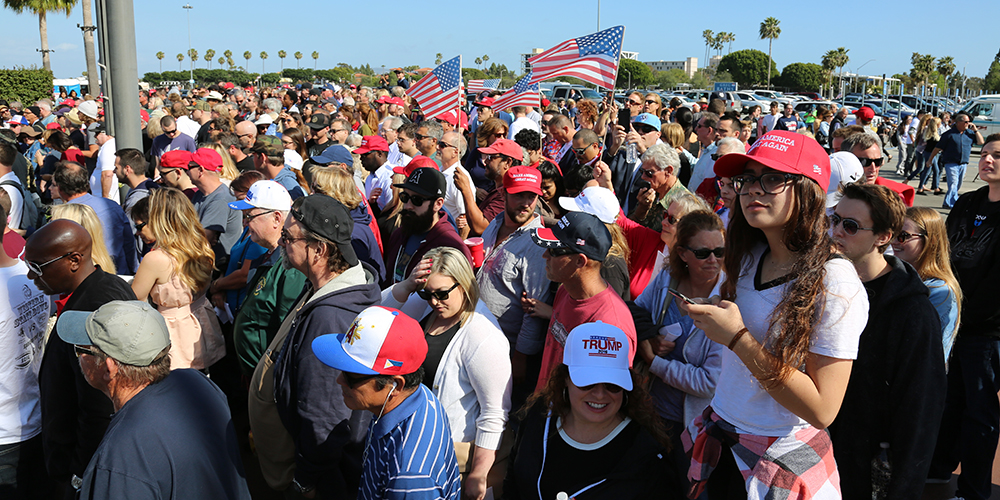 Your political leanings do not give anyone the right to harass you. Protesters have no right to interrupt a private event. With all of that out of the way, there is no way to escape the claim that Trump protests have had violent outbursts. The best way to dispel this claim to simply not get involved with protesters. Inside the rally, you can request that they are removed by event security. It is all the more important that you do not interact with any protestors outside of the event building. In those situations, it is much harder for security to see and intervene. It is also easier to be surrounded.

The outside protesters at the rally do become violent, and this trend has been increasing over the past few rallies. On April 29th in 2016, in Orange County California, 17 people were arrested, a Police car was vandalized and attacked, and a Trump supporter left with a bleeding face. In San Diego CA, on May 28th, 35 protestors were arrested as supporters and protesters reportedly began to throw trash at one another. There were no injuries or property damage reported in that instance, thanks to Police intervention. On May 25th, there was a group of Anti-Trump protesters in New Mexico, which Police could not control. The protesters began to burn things at the Police, which resulted in some injuries.

In all fairness, Trump supporters did a good job of staying out of the violence of these crowds. In the case of the San Diego rally, the only issue was the “back and forth” of the trash throwing. Supporters should not be provoking detractors. This does not result in anything positive in terms of personal security. The Police were able to handle the situation, but most often personal safety comes down to being responsible for your own actions, and the repercussions for those actions. It is not safe to rely on the intervention of a third party. Obviously, it is fine to ask for help and to use law enforcement to protect yourself, but you should not endanger yourself with the hope that you will be protected when things go wrong. It would be more beneficial to seek protection from the authorities than to enter a situation where you believe it may be necessary to defend yourself with violence. 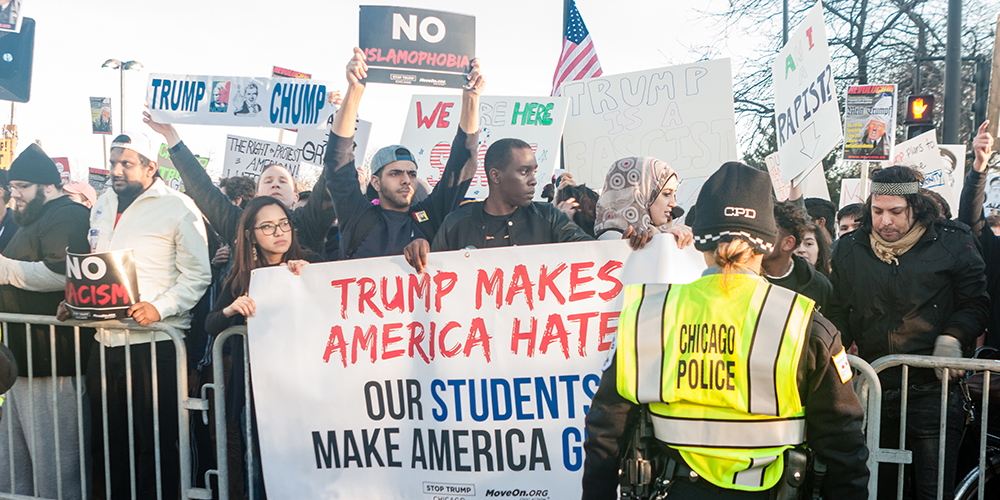 The bodily harm that befalls the protesters has a general trend being between supporters inside the rally, or from Police outside of the rally. In either case, there are several things that can be done on the part of the protesters to make sure that they are not injured while making their message. The easiest thing is to not enter the rally itself. Being outside is enough to get your message across. Once you enter the actual rally and begin to protest, you are interfering with the free speech of others. People have come to see Trump talk, and he has gone through the proper channels to have this gathering. Your freedom of speech allows you to do the same thing. It does not give you the right to interrupt an event.

If you have to make a scene (which you absolutely don’t), be civil and exit without further incident. You have entered a private event, and they are within their rights to remove anyone causing disruptions. Fighting with security will put you at a greater risk of bodily harm. They are not allowed to harm you or assault you, but it does happen, and belligerence is a sure fire way to increase the chances of a violent altercation. Think of the event as a performance like a stand-up comedy show, music concert, or play. The audience has no right, even if they paid, to interrupt the show. People have come to see the proceedings, and any disruption will rightly result in removal from the venue.

Do not be rude, and respect the space and personal agency of others. Realize that wearing something such as KKK hoods or shouting in someone’s face is likely to antagonize them. Again, no one is within his or her right to harm you, but that is not enough to protect you. It is illegal to enter someone’s home and rob them, but we still lock our front doors. Do not create the circumstances to become a victim. Make your point, but do so respectfully. And remove yourself from the situation if things begin to escalate. It is best to do this to not only increase your safety but to maintain the moral high ground.

When you are outside of the rally, make sure that you do not take part or insight any violence or alarming acts of civil disobedience. Keep the protest orderly and safe. If others begin to throw things or become aggressive toward law enforcement, remove yourself from the proceedings immediately. At the point where things begin to escalate toward violence, whatever message you were trying to make has been stifled. The protest has become ineffective, and any further involvement opens you up to harm from fellow protesters and law enforcement. Taking part in the violence is a sure way to get yourself hurt, either by other protesters or by keepers of the peace.

If we look at all of the reported instances of violence, there is a trend of rough grabbing, sucker punches, and pepper spray. The most shocking displays have been the use of fire in the New Mexico protest, and the face of the bloodied Trump supporter in San Diego California. Not as severe as you may have been lead to believe, but certainly enough that you should make an effort to stay safe. In order to avoid injury or any form of bodily harm, it is important to remember to stay calm. No matter where you are in the rally, or what your message is, danger has the possibility of sneaking up on you. Stay safe by being smart. Ask for assistance before you need it. Do not bully, provoke, and then cower. Be respectful, and report those who are not. Not interacting with hotheaded individuals will do the most to keep you protected. Still, though, a threatening or potentially harmful individual should be brought to the attention of the proper authorities. Go forth and make the past presidents proud. Good luck with your politics. Be safe. And don’t forget to vote!