What Kind of Locks Should Emergency Exit Doors Use?

by Taylor ￮ April 18, 2022
'What Kind of Locks Should Emergency Exit Doors Use?' via United Locksmith
https://unitedlocksmith.net/blog/what-kind-of-locks-should-emergency-exit-doors-us
UnitedLocksmith,Locksmith,Commercial 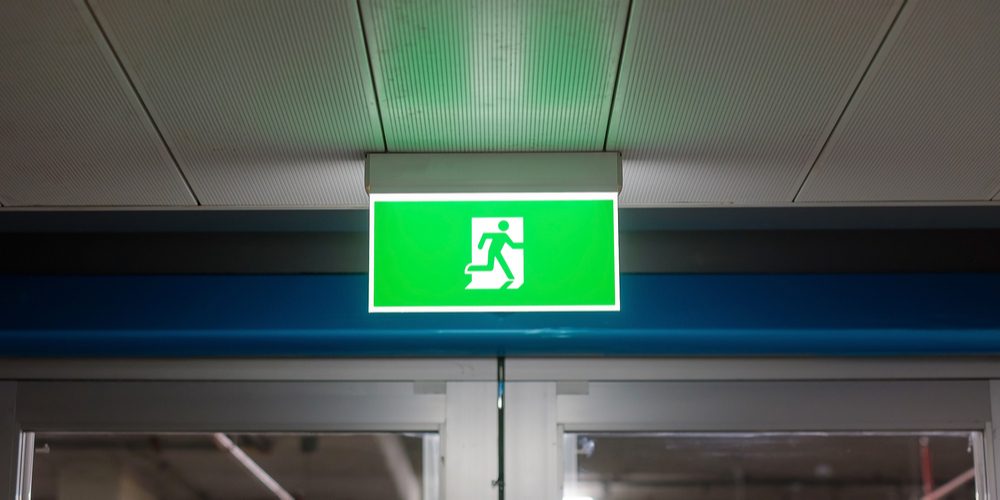 There’s a vital dilemma in building security that you’ve may have never thought about before: How do you keep the building safe while also keeping the things inside secure?

Commercial buildings are jackpots to the average thief: full of money, computers, wares… and human lives. Without those human lives, these buildings could easily be impenetrable fortresses, locked up at all times, and impossible to access. But when disaster strikes, there always has to be a way out.

Essentially, you need the ability to exit freely but not enter freely.

This is the balance that all buildings need to figure out how to maintain: safety and security. When do you focus on one, and when do you focus on the other? Which one is more important? And how does the accessibility of exits play into this?

There are different safety codes and lock types to solve this dilemma. There are also rules on what kind of locks emergency exit doors are supposed to use.

When it comes to an emergency exit door, keep in mind:

So how do you ensure the safety of the people inside the building?

The most obvious solution is to have doors unlocked from the inside but locked from the outside. Fortunately, this kind of technology exists and is what most commercial buildings use. These doors are often installed with multiple mechanisms for the sake of safety.

They mainly operate off of motion sensors that detect people exiting. If the motion sensors fail, they also have buttons labeled “push to exit” that automatically unlock the door when pressed. On top of this, these doors fully unlock if an alarm or sprinkler goes off. They’re also fail-safe, meaning if all electricity in the building shuts down, they unlock.

These doors are helpful, but there are more aspects to consider than just this element of safety.

Every part of a building has to have a path to these perpetually unlocked emergency exit doors. As a result, one of the fire safety codes is that any door along this path should not have the ability to lock at all. You can’t just think about the lock on the emergency exit door itself: you need to think about any locks exiting people may encounter along the way.

The aforementioned emergency exit door system sounds as good as perfect, but there are a few scenarios where you really don’t want a door that operates like this.

The most common safety issue arises at night when your commercial building is empty, and you don’t need these doors to be able to shut off so easily. If a burglar can trigger the fire alarm or use another burglar trick, they can enter through the now-fully-unlocked doors.

You’re going to need to find a way to make these doors operate only when other people are inside. You need to compromise safety a little by having a way to fully lock these emergency exit doors at least sometimes.

Another scenario where these safety doors are a bad idea is when the people inside, for whatever reason, cannot have their autonomy. This is because they’re mentally disabled or otherwise psychologically compromised adults, children without fully developed brains, or criminals who lost their independence when they got arrested.

In these scenarios, you’re required to have someone at the door keeping watch who can unlock these doors in emergencies. But otherwise, you’re going to want to keep these doors locked from the inside to prevent escape. A child or mental patient could get hurt, and a criminal could cause trouble or escape altogether if they could simply use an emergency exit door.

Emergency exit doors must also be locked at all times from the outside to prevent crime.

Crime prevention is achievable through various electronic mechanisms used on modern emergency exit doors. While they can be unlocked from the inside, the lock itself is physically locked in the same way that all locks are. The deadbolt resides in the door, usually through an electric motor, and only moves when someone inside needs to open the door.

As stated previously, motion sensors, alarms, and buttons can deactivate this electric motor and move the deadbolt. Fortunately, none of these methods are accessible from the outside. The emergency exit door is genuinely locked at all times.

The one exception to this rule is in the event of a power outage. An electrical interruption automatically deactivates the deadbolt, and the door is now unlocked in both directions. A criminal hypothetically could find a way to shut off the power and open the emergency exit doors, but fortunately, this is difficult.

Shutting off all the power to a commercial building is something you can generally only do from the inside. At that point, you wouldn’t need a way in anymore.

Many emergency exit doors are literally not at all openable from the outside, taking away the usual parts that doors have, like handles or keypads. Buildings have other entrances for those that want to enter legitimately, so why leave the emergency exit door possibly compromised through criminal lockpicking or bypassing?

There are some situations where this kind of business security may not be the best idea.

If people are automatically locked out from the outside, this may become a problem during the few times you need someone to come in as quickly as possible. Emergency exit doors are designed to have simple and accessible routes in an emergency. If you’re in a situation where emergency workers must come in quickly, they may not be able to come in as fast as possible.

Paramedics, for example, are people from the outside who may need fast access for safety reasons. Of course, in most situations, such as an unexpected medical emergency, they should still have access to the usual ways of entry.

But with some emergency scenarios, these usual routes may become unavailable. For example, an earthquake, tornado, or hurricane may have ravaged the building, destroying the main access points. Fire may have done this, as well.

Speaking of fire, firefighters can have a similar problem. Firefighters enter whichever point appears to have the most smoke, meaning that they need access to all parts of the building at all times. High-security locks in any area can interfere with this.

Sometimes buildings have boxes with master keys that firefighters have the keys to. This, of course, compromises security in the name of safety. The fact of the matter is that buildings that are too secure can impede access to firefighters.

There is a third consideration when designing emergency exit locks outside of the dichotomy of safety and security: accessibility.

Different people have different knowledge and can use their bodies differently. You need to make sure that all of them can exit a building safely at any given time. There are a few requirements that you must consider when designing these doors.

First, using the emergency exit door shouldn’t require any special knowledge. For example, you can’t put these doors behind a keypad or password. They’re also not supposed to need any specific tool to open, like a key.

Second, you should make sure the opening device is easy to use. This generally means you should use crash bars so the door can open even if you don’t have full use of your hands.

They should also be able to be pushed open with little to no effort. Not being physically strong enough to open the door should never be a problem.

The path leading to the emergency exit door should be clearly labeled. If someone is panicking and can’t think clearly, that person should still be able to easily find the exit.

Since accessibility isn’t connected to a fundamentally opposed dichotomy like safety and security, all forms of accessibility are basically always a good idea. There are a few unlikely scenarios that could cause some trouble, though.

Most of the problems with increased accessibility are the same as those with increased safety: they can make the doors easier to access for those trying to open them for illicit purposes.

An easy-to-find emergency exit door is an easily found escape route. A lightweight door is something that can be forced open even if it’s locked at night. And the fact that you can’t protect these doors with keys or keypads means that any criminal can open them from the inside at any time.

You may notice these scenarios are only a problem if the criminal is already inside the building and avoiding restraint. These locks don’t get in the way of security if someone is trying to break into the building. And once they’re already inside, there’s not much stopping them anyway.

These accessibility measures may make the worst-case scenario slightly worse, but they aren’t really getting in the way of security much. Once again, increased accessibility is basically not a problem at all.

What is an exit device?

An exit device is a specific door handle found commonly on emergency exit doors. They’re designed to make exiting as easy as possible, hence the name. They can be opened with nothing but a simple push. No need to turn a handle.

How do emergency doors work?

Emergency doors are usually locked from the outside and unlocked from the inside. This means that one does not simply walk into your commercial building, but everyone inside can still exit during an emergency.

What is a panic door?

A panic door is a door installed with a panic bar. Panic bars are those opening devices that consist of a bar across the door that, when pushed, opens the door. It’s pretty simple.

How do you use a panic exit device?

Panic exit devices are designed to be as easy as possible to open. All you need to do is push on the bar, and the door will open.

Ideally, you need a door locked from both sides at night but unlocked inside during the day. Make sure the door is fail-safe and opens with a crash bar.

The best door exit device prioritizes the safety of the occupants, the security of the lock, and the accessibility to all possible users.

How do emergency exits in the workplace work?

Emergency exits in the workplace are designed to be visible and open during an emergency. They are always locked from the outside but can be locked from the inside at night. This maximizes security and safety.

You probably don’t think about emergency exits very often, but they’re one of the most essential parts of any building. They have to be both secure and easy to access. They can even be the deciding factor between life and death in certain unfortunate circumstances.

Emergency exit doors must strike a precise balance between safety and security. Through the years, exit devices have been developed to hit the middle ground between these fundamentally opposed goals as best as possible.