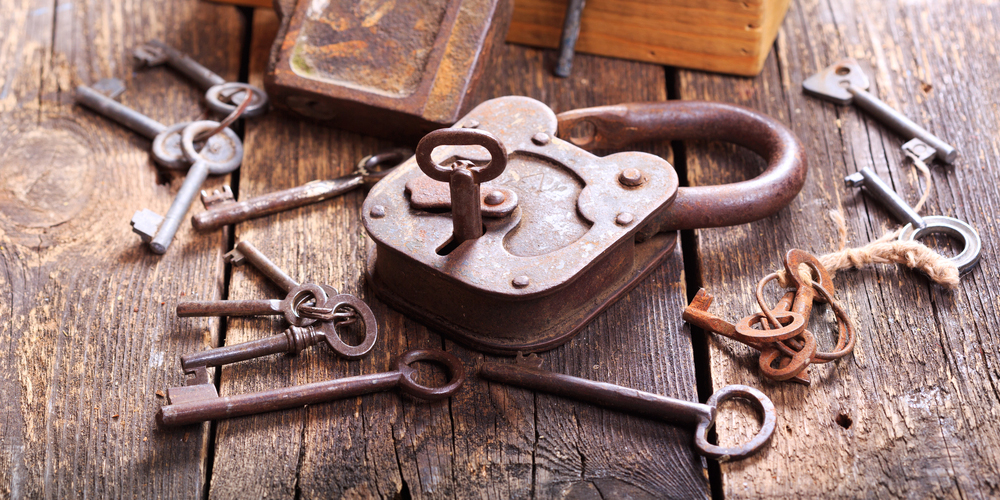 We have compiled this list of the 10 weirdest locks that the world has to offer. These are real devices that you or the citizens of history could have used to protect their valuables. There is a veritable smorgasbord of diverse locks on this list. Everything from locks that are centuries old to technology that has just been released in the past year. Some of these designs are puzzling, and others are actually puzzles. These locks are so weird that they cannot be understood with just a picture. To really comprehend what is happening with this unique contraptions, you need a video and some explanation. So without further adieu, here are 10 of the weirdest locks we found.

This Indian made padlock requires the users to know a couple tricks in order to open it. A bolt must be backed out of the lock body, and the keyway cover needs to be rotated to the 9 o’clock position. After all of that finagling, the key will still need to be inserted. The lock internals use a lever system, which can vary in quality depending on the manufacturer, but picking it will do you no good without first preparing the keyway. The practicality is not great because of necessary access to the back of the lock needed to unscrew the rounded bolt. Also, the cover for the keyway is elevated quite a bit off of the lock body, so it will not be keeping all of the dirt and grime out. It is definitely more wacky than practical.

Just by looking at this lock, you know that it is something weird. The shape of the device is what gives it the name “Dumbbell Lock”. It does not look all that practical due to its size, but it can be used in several ways. Just like any other padlock, you can place it through a hasp or a chain. With the appropriately sized doorknobs, you would even be able to hold a pair of double doors closed. The sheer size of this particular dumbbell lock would also lend itself to be used as wheel lock for your motorcycle. In terms of the keyway, it is also very weird. The 5 sided Judo keyhole puts it outside of the standard oddity of cross locks. Sure it can be picked, but it has a whole lot of weirdness to offer the world.

The Nokē padlock is a fully keyless lock. The company was so proud of this fact that they named their product Nokē, which is pronounced as “No Key”. So how do you open it? Well, it can be opened with a smartphone or tablet. With Bluetooth signaling and a downloadable app, you will never be looking for your key again. But smart locks aren’t that weird. What is truly strange about this lock is the fact that it can be set to open with morse code. Press down the shackle with differentiated short and long applications of pressure, and your lock will open right up. There is no key override of the lock, but there is a port at the bottom. This can be used to jumpstart the lock when the battery has died by touching a new battery against the terminal. You may also think that it is magnetic because there are no visible cutouts on the open shackle. But it does use ball bearings (so it cannot be shimmed), the locking dog is just so far down in the body that the cut in the shackle is imperceptible.

These Lily Water padlocks have all kinds of interesting body shapes, but the truly weird part about them is their keyway. It is a cruciform type four-way pattern, with a distinct bend on each of the side holes. Though the keyway has a kind of pinwheel shape now, originally those soft curves where hard angles. This gave the lock a swastika-shaped keyway, which in the Buddhist and Hindu markets that it was intended for simply meant “all” or “eternity” in Sanskrit. (In the video the swastika-shaped keyway is what the speaker is talking about when he says, “…another padlock with a little bit different keyway I can certainly not do a video about that because it would be against German law”). Not only is it weird for its unintentional offense, but the lock uses a dimple system instead of the basic cruciform style pin tumbler. This results in a weird looking key that ends up with the appearance of a drill bit. Also, the key can only be inserted one way. That means that all of the pins are active.

The Lunatic Lock is certainly more puzzle than practical in terms of its possible uses. This padlock can be easily identified as out of the norm by the rather large bolt that is resting between the two arms of the shackle. Also, there is no keyway. The way to open it is by inverting the lock so that the bolt is in a position to be moved freely. Pull it out halfway, and then invert the puzzle so that it would lock, if pushed too far up or down. Wiggle the bolt a little at the halfway point, then it will lock in the middle position and the lock can open. It is certainly a weird lock, but perhaps not the best to use for your security needs. Opening this lock is sure to give people a headache, but it will not stand up to most criminals.

If you want to get some very innovative lock designs, antique padlocks are a great place to look. Before the public became satisfied with standard pin tumbler designs, lock manufacturers were trying some weird stuff. In this case, the lock was made more than 200 years ago, so you know it has some tricks up its sleeves. In the case of the Viennese Cover lock, it has several spring loaded panels. One obscures the keyway entirely. By applying downward pressure to the bottom of the panel, the keyway is visible. Then you need to insert the key. Once the key has made a full rotation, and moved the locking dogs out of the way, the lock is still secure. You will then need to move a panel on the back of the lock to the side and pull the shackle up simultaneously. Such weird maneuvers are needed, but what is really crazy is that the lock still works so well after 200 years!

When you get a padlock with a key and a keyway, the method of entry seems pretty straightforward. But if you were to simply insert your key into the keyway of the New Gulshan Padlock, nothing will happen. No matter how you rotate or what you press on the lock body, the lock will never open this way. That is because the displayed keyway does not interact with the levers at all. Any attempt to pick the lock through this keyhole would be fruitless. What you need to do instead is depress a small button on the lock using the long thin protrusion on the key. Simply using your bare hands will not be enough, you must use a small tool. Once the button is adequately depressed, a spring loaded door will open, revealing the true keyway. The key can then be used to turn in this opening. Very tricky, and definitely one odd lock.

This lock, made by the manufacturer, LIKE, is meant to lock the gear shift on a car. The appreciation of a manual transmission is pretty rare, but it is still more common than this weird lock. The freakiness begins with taking a look at the key. They look like miniature key cards with small rectangular holes and indents punched into the thin metal. In all, the lock has 16 active elements. And I say elements because the pin like internal components are certainly not pins or wafers in any classical sense of the word. One of the ways that you know the lock is unique is that it is branded with all kinds of warnings about copyright infringement. The one thing a lock needs in order to go mainstream is people infringing on its patents, so it is no wonder there are no locks that use this system. If you put this on your car, no one is going to be bypassing it or picking, because they would not know what was going on in this crazy lock.

When you see the key for this lock, you know you have entered the realm of weirdness. The keys to these padlocks are threaded like the “screw key” system that was used in ancient Slavic padlocks. However, the weirdness does not end by using ancient technology. For added oddity, the key also has dimple cuts along the helical grooves. By twisting the key into the keyway, you have started the insertion process. It must be completely twisted into place, and then a final rotation will release the shackle. This is different than the original screw key system that worked similarly to a modern day barrel lock. The Saint Fire captures a resurgence of old technology mixed in a way that makes it new again. The fact that this never caught is not surprising, just because of how weird it looks. Truly one twisted key!

In order to open this padlock, you are going to need to use 3 different keys. That right there is enough to make this one weird lock, but how you use them makes this one of the weirdest locks ever made. The lock does not even look like a lock. It is closer in appearance to a decorative antique. This is mainly because of the shape lock, and the lack of a keyway. To open it, begin by using the key with a square hole to unscrew the long protrusion at the bottom of the lock. Once this is removed, insert that same key into the new opening. As you continue to turn the key, the lock will expand, revealing a new keyhole. Don’t worry about that, quite yet. You need to insert another key in a different hole that has opened on the side of the lock. You have to screw this key into the side hole until it stops. Now the final key can be placed in the last keyhole. Complete a half turn in the keyway and the shackle will release. It doesn’t get any weirder than that folks.

What a bunch of weird locks! But now you know that you can unlock your security devices with Morse code or by finishing a complicated puzzle. There have never been more ways to open your locks then there are today. Whether it is ancient technology, crazy designs, or circuit boards, it can be used to give you some peace of mind. The practicality and safety of each of these locks will vary. Make sure that you consider all of your options before choosing the right lock for your security needs. For collectors, you cannot go wrong with these safety oddities.