Everything You Need To Know About Rim Locks

by Hugo Reed ￮ March 28, 2018
'Everything You Need To Know About Rim Locks' via United Locksmith
https://unitedlocksmith.net/blog/everything-you-need-to-know-about-rim-locks
UnitedLocksmith,Locksmith,LockTypes 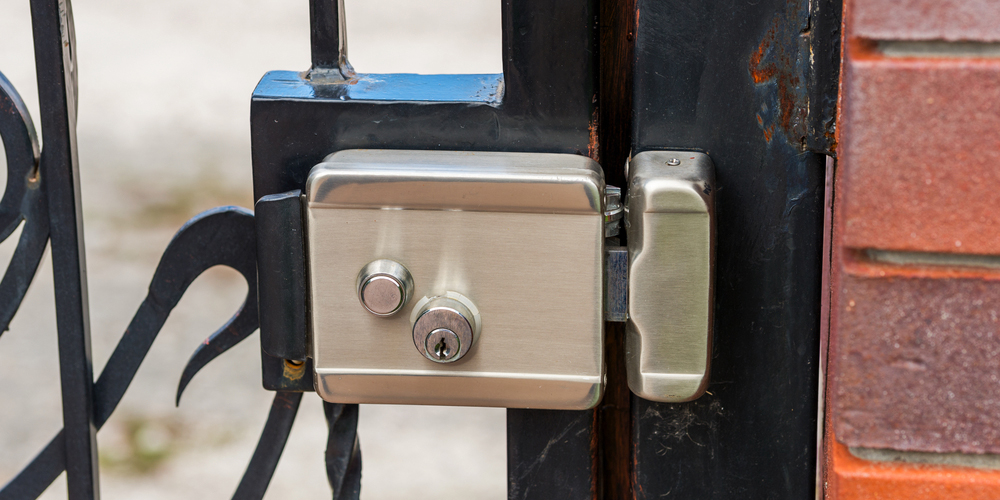 If you think I’m misleading, check out the history of padlocks or the history of handcuffs, both make for a fascinating read. Rim locks are rather old locks, and their core design has not changed much over the years. This is one of the reasons you will usually find working rim locks on much older buildings. Enough of the chatter though, let’s dive headfirst into learning more about rim locks.

What are Rim Locks?

The key is what is used to engage and disengage the lock or retract and throw the bolt. Another unique feature of the rim lock is that the key can operate the lock from both ends of the keyway, as is shown here. Rim latches and rim sash locks are the main types of rim locks. A latch is used to secure rim latches, while the combination of a deadlocking bolt and a latch are used on rim sash locks.

If you assess a rim lock based on its appearance alone, you will come to the conclusion that rim locks are much different than any of the other locks you have come across. You will not be entirely wrong with this assessment. Most rim locks are warded locks. Warded locks make use of wards to prevent unauthorized access if the wrong key is used.

The key that is meant to fit your rim lock will be shaped appropriately, in such a way that it will easily pass the wards in use. As you can tell, the locking mechanism varies greatly from the more common pin tumbler lock that works by separating pins at the shear line.

A Brief History Of The Rim Lock 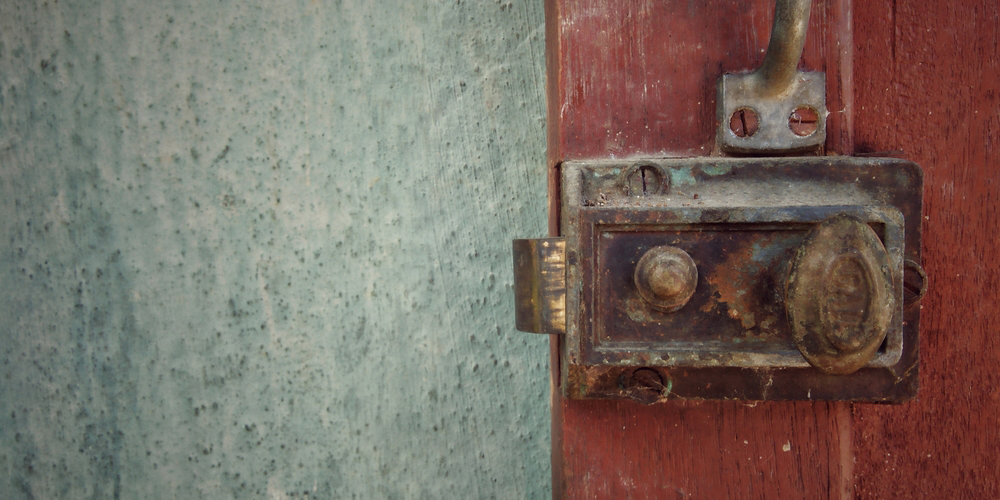 James Carpenter initially started working on the new and improved designs alongside a man named John Young. The two gentlemen were meant to split the patent for the resulting lock. Instead of ending up with a joint patent, Carpenter patented a perpendicular action rim lock and Young went on to patent what would become the foundation for the modern mortise lock.

Although James Carpenter laid the groundwork for the modern rim lock, it was his John Carpenter who really influenced the way the rim lock is used today. John Carpenter made modifications to his father’s patented design and was able to produce a rim lock that could be used bi-directionally.

Rim locks have been in use for over 150 years, and they are still in use today. From their inception in England to their introduction into the early American colonies, the rim lock has been able to withstand the test of time. However, they are not as widely used as they once were.

The advancement of locking mechanisms has led to the creation of new and improved locks that overshadow the rim lock in terms of security. It is highly unlikely that you will find a rim lock in use as one of the best front door locks. Although they are not as popular as they were in the 1800’s, the rim lock can still be found and in use.

The rim lock is not as prevalent as it was in years past, but it is still used in some places. The trick is knowing where to look. In the past, most rim locks were used on exterior and interior doors. Today, they are commonly found on interior doors and on shed doors that are too thin to house traditional deadbolt locks or mortise locks.

Some of the rim locks used on interior doors are well maintained and preserved originals, but these are few and far between. Older rim locks can be found in older homes in various countries around the world, most often in the United States and the United Kingdom. Aside from the originals, there are many modern replicas that utilize the traditional rim lock design. Here is how they are used today:

Primarily, rim locks are used as a locking mechanism on interior doors. Rim locks are best suited for interior use because of their security flaws. Deadbolts are integral to exterior doors because they are able to withstand much more force. Rim locks are not built to take as many hits as their lock counterparts, and they can easily be bypassed applying enough force.

Interior doors are not exposed to the same threats as your exterior doors. As such, rim locks are the perfect addition for any homeowner who is looking for great interior locks. Their intricate designs and unique construction also make them a preferred choice among homeowners who are keen on the design.

Rim locks are not the most secure locks around, which is why they are not often used as exterior door locks. If you do happen to see a rim lock in use on an exterior door, it is likely to be an additional lock. Some rim locks are used in addition to the more secure deadbolts and mortise locks. The presence of a deadbolt negates the inherent structural weaknesses of the rim lock.

As an additional lock, the purpose of the rim lock is two-fold. First, it helps bolster the security of the primary lock that you have in place. Secondly, they add an air of charm to your home, as was discussed in the point above. Exterior door locks should ideally be much stronger than the interior locks. Simply because they will experience more revolution cycles and they are your first line of defense against burglars.

Parts of a Rim Lock

The way a rim lock works is rather simple, especially in comparison to other locks that exist on the market. It would take much less time for someone to explain a rim lock than it would for them to tell you the true definition of a smart lock. The main parts of a rim lock are the lock body and the keeper. In addition to these, the escutcheon plates and privacy latch will also be explained.

The rim lock body was usually made from cast iron, but in recent years brass and nickel have been used as substitutes. Inside the lock body itself, rest the spring loaded latch and the deadlock bolt. If the rim lock in question is a rim latch, then the lock body will not have a deadlocking bolt.

The keyway of a rim lock is designed bi-directionally. This was the cool addition that John Carpenter made to his father’s early design. A bi-directional rim lock can be installed on right-sided or left-sided doors.

Rim locks are traditionally keyed locking mechanisms. However, the rim latch is not always used alongside a key. The spring-loaded latch is operated by means of a handle or a knob. The knob spindle is run through the door to connect the outer knob to the lock body. The key that is used with the rim lock operates the deadlocked bolt.

The deadlocked bolt is held in place by a lever mechanism. When raised, the lever mechanism latches onto a section of the deadlock bolt and holds it in place. The bolt can only be retracted once the lever is lowered, and this is where the key comes into play.

Once the appropriate key is inserted, the lever is engaged in a way that lifts its top section and lowers its bottom section to allow the bolt to retract. Essentially, the key is engaging the lever while simultaneously lifting, and sliding the deadlocked bolt back and forth.

The keeper is the companion piece to the rim lock body, and it is meant to hold the latch and the deadlock bolt in place when a specific door lock is closed. Similar to the lock body, they are usually made of cast iron.

Escutcheon plates are usually flat metal pieces that are fitted to provide additional protection, and also to add some decorative flair. There are some modern locks that use escutcheon plates and some that don’t. However, due to the vintage design of the rim lock, escutcheon plates are an important part of the overall lock. They are used to guard the doorknob and to outline the keyway.

Not all rim locks have privacy latches, but it is still an important part of the rim lock that you should be made aware of. The privacy latch allows the door using a rim lock, to be locked from the interior. The unique thing about the rim lock is that once it is engaged, the door cannot be operated by using the key on the opposite end unless the privacy latch is disengaged. This proves to be a hazard in emergency situations because the door usually needs to be kicked down for access to be granted.

Installing a rim lock is extremely easy, and I do not mean this as a euphemism. I believe that even homeowners who are averse to DIY solutions can accomplish this solution. However, before I get started, let me offer a word of caution. If you know that you will not be able to pull this installation off, do not hesitate to contact a residential locksmith who has the skills to perform a lock installation. Here are the tools and parts you will need to install a rim lock:

To install your rim lock, here are the steps you need to follow: 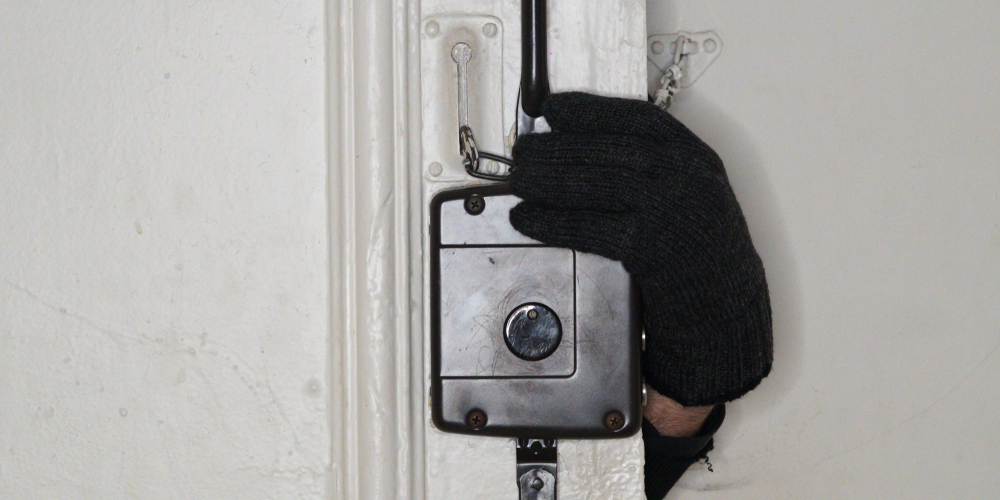 As you should know by now (because I have said this a few times), rim locks are not the greatest locks in terms of security. Though they are lock mechanisms that require a key for their operation, does not mean that the lock itself is overwhelmingly secure. Let’s take a look at some of its more prevalent weaknesses:

The weaknesses of a rim lock can be counteracted if the lock is used in conjunction with a more secure primary lock. A good choice for a primary lock in this scenario is an ANSI Grade 1 rated deadbolt.

Rim locks are a part of lock history and they will likely remain in use for quite some time. Always remember that a rim lock is better suited for use on interior doors rather than exterior doors. Using a rim lock on the entry doors in your home can potentially cripple your home security and this is a risk you do not want to take. If you ever need help installing a rim lock, do not hesitate to contact a trusted locksmith.