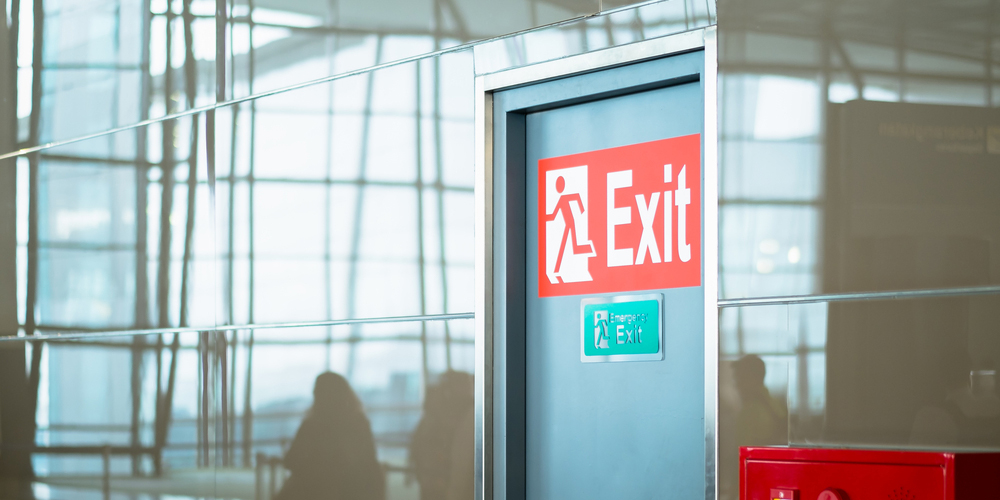 However, any company that has even a semblance of an emergency plan will tell you that fire rated doors and fire door locks are an integral part of their plans. This same notion applies to homeowners as well. Any homeowner who has taken the time to assess their home security will be aware of the impact that fire doors can have on their overall safety. Fire door locks might sound like they are door locks that are made out of fire (which would be rather cool), but they are a lot more down to earth and useful than that.

Fire door locks are usually used in conjunction with fire doors or fire rated doors. This is usually done to contain the spread of fire within a commercial building or a home, while also functioning as a safe method of egress for occupants within a home or commercial building. Fire doors and fire door locks are much different than their regular counterparts because they are made specifically to be somewhat fire resistant. Much in the same way deadbolts used on exterior doors are meant to enhance security by being able to withstand a lot of force, fire door locks are built to withstand the pressures of immense heat.

In today’s article, we will be talking about fire doors and fire door locks, and the ways in which they impact emergency exits. This means that we will be looking at this from both sides of the spectrum. In layman’s terms, we will be looking at how fire door locks and fire rated doors are structured and placed to withstand the pressure of fire, as well as what goes into this intricate process. Also, I will explore the ways in which they boost security by making egress during an emergency feasible. Let’s get started and dive into the world of fire door locks and fire rated doors.

What Are Fire Doors?

The first time I heard the term fire doors (which was many years ago), I conjured up an image in my head of doors that were constantly ablaze, mounted in front of the treasure room of some wildly weird person, similar to Smaug. I wasn’t disappointed when I found out what they were, on the contrary, I was rather impressed and intrigued. This was mostly because fire doors and fire rated doors are an important part of safety, and security that myself, and many others, occasionally take for granted.

Commercial locksmiths and emergency locksmiths have dealt with fire doors and the mechanisms that are used to install and operate them. It is important to make sure that you always consult with professionals who are familiar with your building codes. Fire protection protocols should be taken seriously because disregarding them or being ignorant of them can lead to serious damage and loss of life.

To understand the basic requirements of a fire door lock, you have to understand the purpose that fire doors and fire rated doors are trying to achieve. Essentially, a fire door is meant to have the capabilities of a regularly functioning door at all times, and this means that in some capacity it should have the ability to grant and restrict access. In addition to this, fire doors have to be able to grant egress in the event of a fire or any other applicable emergency that calls for a quick and expedient exit.

The fire door also has to be able to contain a fire within a given area and prevent it from spreading to other parts of a building. This is a very important factor that many people forget to take into account so they often install carpets and other decor items near fire doors which help the spread of fire rather than decrease it. The final purpose of a fire door is similar to any other safety measure: it is meant to secure and protect life and property.

The fire door lock itself does not only consist of the locking mechanism that bars or restrict access, but it also consists of other components which are usually collectively classified as fire exit door hardware. This hardware consists of the fire door hinges, the latching mechanism, the closing devices and the releasing device. It is these elements that come together as fire exit door hardware and fire door locks.

Every fire door (that has been appropriately labeled as so) should be hung on hinges that are incorporated as a part of the fire door lock. However, one of the requirements for fire doors stipulates that the hinges be steel bearing hinges or heavy duty steel hinges. The reason behind this is the fact that other materials are not able to withstand the pressure and intensity of high heat in the way steel can. If non-steel bearing hinges are used on fire doors and in conjunction with fire locks, there is the potential that the hinges will be damaged, which will lead to the malfunction of the fire door in a critical situation.

As I mentioned above, there are a few requirements that fire doors have to meet and if there is anything that impedes their core function, then there are a great many lives and things that will be put at risk. For instance, fire doors are meant to contain a fire within specific locations, or help grant egress in an emergency. If the hinges begin to malfunction, none of the aforementioned objectives will be fulfilled.

There are several different options that buildings can take advantage of when it comes to locking mechanisms as well as closing and release devices. In choosing these elements, it is always important to be mindful of the purpose of a fire door. This will help you choose the best solution for your needs. As I mentioned earlier, it is important to make sure that all fire doors are labeled appropriately.

All fire doors must make use of an ‘active’ latch bolt that serves to help keep fires contained in specific locations of a building. In some cases, deadbolts can be used in conjunction with these latch bolts. However, they should not be used on doors that are meant to be an exit point. The reason behind this is because deadbolts are not considered active latch bolts, which makes the point of egress vulnerable.

If you end up placing a deadbolt on a fire door, make sure that the material is made to be fire resistant and that fire door is meant to contain a fire rather than let people out. It is always important to have an active latching device in place to that doors can remain closed under the pressure from fires, but also so that they can be used to allow egress if need be.

You should keep in mind that not all fire doors are mechanical doors and that some use electronic locks as a part of their locking hardware. Electronic locks that are used on fire doors should be fail-secure. A fail-secure lock utilizes electric current to retract the latch bolt that it has in place, so if there happens to be a power outage, the bolt will remain securely locked in position. These locks should only be used on doors that are not meant to allow egress. This is something that will be decided in the planning stages before the fire doors and protective systems are implemented.

Another necessary requirement for fire doors and fire door locks is planning. This might sound mundane or redundant, but using fire doors and fire door locks in the wrong way drastically reduces their effectiveness and efficiency. The layout of the building always has to be taken into account and this should go hand in hand with any emergency plans that are in place. This simple measure will allow you to install the fire doors in the most appropriate locations and maximize the chances of a fire being contained as well as people being able to exit safely. 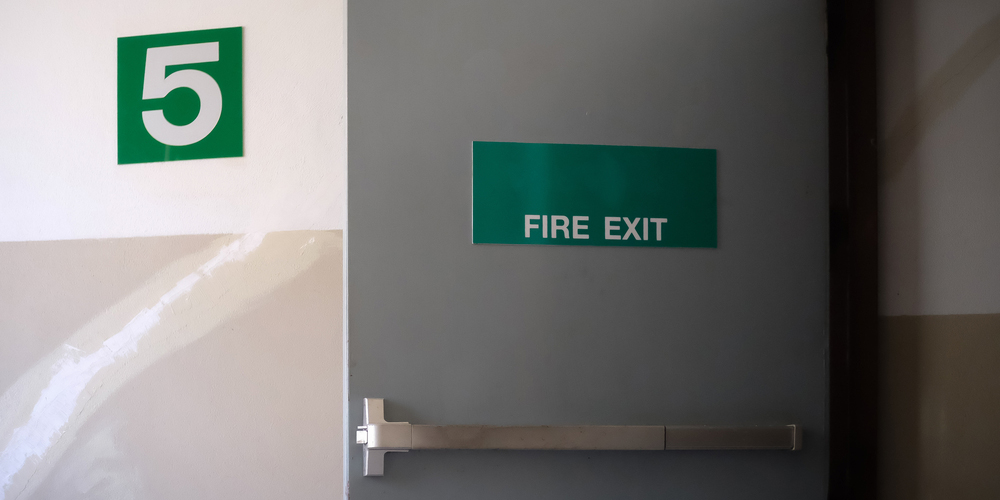 When you talk about securing emergency exits, you should not think of it in the way in which we normally discuss lock security, and the ways these locks are used to fortify doors. Before you get carried away, I am not implying that fire door locks provide the illusion of security. On the contrary, they are effective at security, just not in the way you might be thinking.

The reason behind this is because in this context we are dealing with a much different aggressor than a common burglar or a criminal, and there is very little room for error. As I have alluded to several times, the smallest error can lead to loss of life and property. Fires spread quickly and it can be extremely hard to combat, which is a factor that is always considered when it comes to security exits and fire doors.

The nature of fire door locks and latches make them far better suited to use with fire doors and fire resistant doors. This is not to say that other locks have no place or value, but if any of the high-security locks we have discussed in the past are used on a fire door, there is an increased chance of something going wrong, especially if the door is meant for egress purposes.

Fire door locks make emergency exits more secure by allowing them to operate as potential exit points, while also simultaneously working to stop fires from spreading. The way this is accomplished can be narrowed down to the nature of the active latch bolts that are used as well as the material of the other fire door hardware parts. In case you are ever confused about whether or not a door is a fire door, and you are wondering about the kind of locks that it uses, keep in mind that most fire exit doors appropriately labeled.

Fire door locks are quite different than any of the other locks that we have discussed in the past. As I pointed out, this is mostly because they are tailored towards achieving a much different result than regular door locks. Similar to other locks, these are geared towards keeping some things out and granting passage, but not in the way they would be on regular doors. Fire doors are important to any safety plan, and I hope that learning more about the ways fire door locks make emergency exits more secure will help you see them as a necessity.