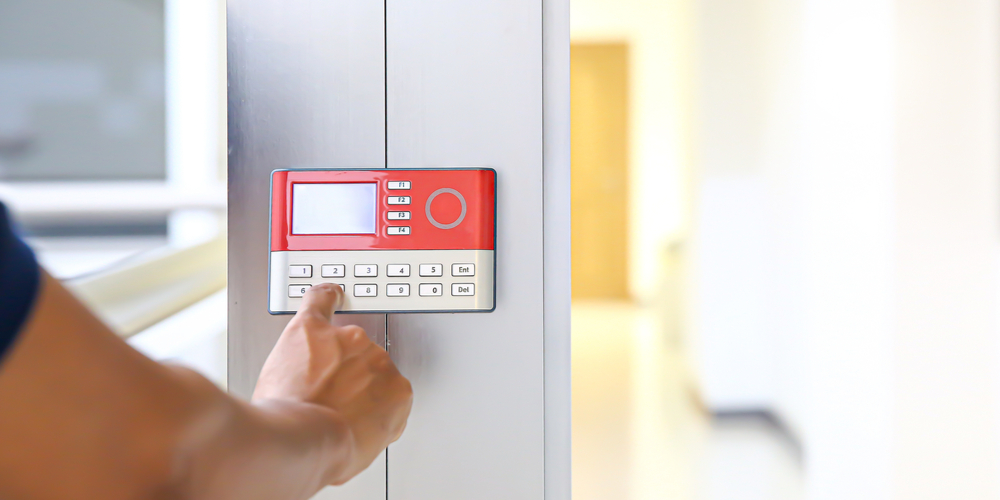 If you’re looking to buy an electronic lock, you may have come across the terms “fail-safe” and “fail-secure.”

These names are kind of weird. Don’t you want your locks to be both safe and secure? And what’s the difference between the two, anyway? You’d think that all locks are designed to be safe and secure, so it sounds weird that they would differentiate them as two distinct concepts.

Physically speaking, you obviously can’t have a lock that does both. You need to plan for failure and consider the safest conditions if your electronic lock is no longer working. So which one is better?

If you want to know about the merits of fail-secure vs. fail-safe, you need to understand both of them and the circumstances that they are used in. One isn’t better than the other. Both are useful in different contexts. But which context matches your situation?

Here is an overview of fail-secure vs fail-safe

So what is a fail-safe electronic lock?

Fail-safe means that a lock is locked while electricity flows and unlocked with no electric source. This is “fail-safe” because, when the electricity fails, any people inside will be safe rather than trapped. These locks are also known as “fail-unlocked.” Basically, fail-secure vs. fail-safe locks is a matter of what the electricity does to the lock: does it lock it, or does it unlock it?

Many residential locks have electronic locks that activate deadbolts via tiny motors. In a fail-safe lock, the motor must be running for the deadbolt to be in the door jamb. Once it shuts off, the deadbolt retreats back into the door.

Electric strike locks have small mechanisms that hold onto the door’s latch when the door is locked. When it’s unlocked, this mechanism moves. Depending on how the electricity flows, these can be either fail-safe or fail-secure. In fail-safe strikes, the lock needs electricity to hold onto the latch.

Fail-safe is the most common type of electronic lock and is activated in several ways. Whichever method you use, the lock will be open if power is cut off. Fail-secure vs. fail-safe is a matter of whether or not you can afford power being cut off.

When To Use Fail-Safe Locks

Fail-safe, as the name implies, is best when safety is more important than security. That’s the main obvious difference between fail-secure vs. fail-safe.

Fail-safe works best for emergency exit doors, as some emergencies may cause power outages. In those instances, people would still be able to exit the building. Any power outage at all should not trap people in one space.

Fail-safe also works for any situation where easy access is vital. Fail-secure vs. fail-safe does not prepare for easy-access situations. Locks protecting things like food and medicine should not stay locked in power outages.

Fail-safe locks should not be used to store valuables that you don’t need immediate access to. In instances like these, all a criminal has to do is shut the power off to access these valuables.

Safes are a dangerous place for fail-safe locks, ironically enough. I guess you could say they fail safes.

Whether or not fail-safe locks work for residential buildings depends on your perspective. If the power went out and worse came to worst, would you be able to find another way out of your house? If not, then fail-safe is a good idea.

A fail-secure lock is a lock that stays locked even when the power fails. They’re also known as “fail-locked” locks, which is arguably more descriptive and less confusing.

Fail-secure locks have mechanisms that allow them to stay locked even without power. It’s “fail-secure” because when electricity fails, all of your valuables are still secure.

Fail-secure vs. fail-safe is all about whether or not “locked” is the default state. Fail-secure locks are essentially deactivated with action and are activated all the time otherwise. This means that any action that induces electricity causes them to unlock. When that electricity is taken away, the lock goes back into place.

Most residential electronic locks have deadbolts that move through the activation and deactivation of motors. These can be both fail-safe and fail-secure. When they’re fail-secure, the motor pulls the deadbolt out of the way when it’s turned on, and, when deactivated, the deadbolt slides back into place.

The only electronic lock that’s inherently not fail-secure is the electromagnetic lock. All electromagnetic locks need electricity running through them to use their magnets, as that’s how magnetic fields work. As a result, all of them will unlock if their power is shut off.

Fail-secure (vs. fail-safe) is less common, but it’s better for security, as the name suggests. The mechanism changes from lock to lock, but all of them will keep the door sealed tight in power outages.

When To Use Fail-Secure Locks

Fail-secure locks are best used in contexts where security is more important than safety.

Fail-secure locks work best in places where valuables are being stored. Safes and keypad locks are a good context for fail-secure locks. So is any place where money or important documents are kept, and people are unlikely to become trapped behind locked doors.

In the classic action movie Die Hard, the villain, Hans Gruber, tries to steal a fortune from Nakatomi Plaza by tricking the FBI into shutting off the power. This allows a safe to open and Hans to steal the fortune. The truth is, if the Nakatomi Corporation had simply used fail-secure locks, Hans’s plan would have been foiled from the start.

Fail-secure locks should not be used in contexts where safety is a concern. Using fail-secure vs. fail-safe locks for the entrance or exit of commercial buildings is dangerous. If something happens to the power, people could be trapped inside.

Emergency exits are especially dangerous if they use fail-secure locks. Many emergencies result in problems with the power.

Even if your lock has no people behind it, ensure that it doesn’t protect valuables that you might need quick access to, like medicine or food.

Overall, check whether or not safety is a concern before buying fail-secure vs. fail-safe locks, as safety is where these locks fail. If a locked door poses a safety risk, then fail-secure locks are not a good idea.

After all of that, which one is better? What’s the consensus on fail-secure vs. fail-safe?

One isn’t better than the other. Fail-safe and fail-secure are both useful in certain contexts. There’s a reason that companies sell both: they have their uses for all kinds of different customers.

You can boil the question of fail-secure vs. fail-safe down to two smaller questions. Is the lock protecting any people? If not, is what it’s protecting vital to life? If both of these questions are answered with “no,” then you should get a fail-secure lock. If any of the answers are “yes,” then fail-safe is better.

An ideal lock would become unlocked in emergencies but locked when criminals falsify emergencies to break in. This is, of course, not physically possible (yet). Maybe someday we’ll make a technology that can read people’s intent before opening a lock for them. For now, that doesn’t exist.

The question is, then, what intent is more likely? Is this a situation where someone might be trapped and honestly trying to exit an area where someone would be trying to get inside for illicit purposes?

When it comes down to fail-secure vs. fail-safe, a good rule of thumb is to use fail-safe locks for doors and fail-secure locks for safes. Keep your valuables inside carefully-chosen safes, and keep people inside the doors with easy access to the outside.

What’s the difference between fail-safe and fail-secure?

The name comes from the fact that a fail-safe lock on a door would allow people to exit the door if it failed, rendering it safe. Conversely, a fail-secure lock would keep all of your things secure if it failed.

What is a fail-safe lock?

A fail-safe lock only locks when electricity flows into it, meaning that anyone inside is safe if the electricity fails, as they can freely exit.

What is a fail-secure lock?

A fail-secure lock only unlocks when electricity is flowing into it, meaning that your valuables are secure if the electricity fails, as it stays locked.

Is a fail-secure lock still safe?

It is not a good idea to use a fail-secure lock in a context where there might be people who need to unlock the lock in an emergency. Fail-secure locks are not safe when used on exits or when protecting items that someone might need fast access to, like medicine.

Is a fail-safe lock still secure?

Fail-secure vs. fail-safe is an important question when choosing an electronic lock. They both have their strengths and weaknesses. Determining which one is right for you comes down to knowing which strengths are necessary and which weaknesses are better to avoid.

Fail-safe locks may be safe, but they’re also not as secure. Someone just needs to turn the power off to unlock these locks.

Fail-secure locks are secure but become unsafe in power outages. They’re not a good idea if someone might get trapped somewhere, or something important might become inaccessible.

Keeping good security is challenging. You must do a lot of research on any specific lock you’re planning to buy. Use your best judgment and make a decision based on your situation.

The best method of security is layering. That is, using multiple crime prevention strategies to prevent theft. It’s not a matter of fail-secure vs. fail-safe, but using both. Keep your doors fail-safe, and get extra security with fail-secure safes on all your valuables. This is optimal physical access control.

What kind of security do you use? Leave a comment below!