Lock Pick Guns: What Are They, And How Do You Use Them?

by Taylor ￮ January 3, 2022
'Lock Pick Guns: What Are They, And How Do You Use Them?' via United Locksmith
https://unitedlocksmith.net/blog/lock-pick-guns-what-are-they-and-how-do-you-use-them
UnitedLocksmith,Locksmith,LockPicking 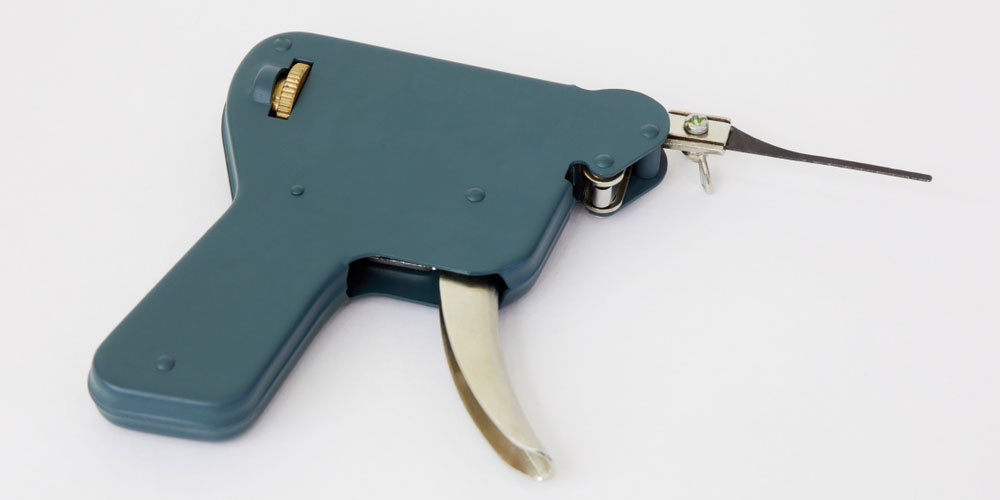 Ever since locks were invented, people have been dreaming up new ways to bypass these complex mechanisms and access valuables that the owners may prefer they don’t access. Specifically, figuring out how to get past locks without using a key could be used to various ends. Several people have created tools to accomplish just that.

One of these tools is the pick gun. A pick gun, also known as a snap gun, is a device that can be slid inside a lock and, when snapped, force the driver pins upward, unlocking the lock without the user ever needing a key. A similar tool is an electric lock pick, which uses the same principle, but with an electric motor instead of a manual trigger.

But how versatile is this tool? Can you really use it, quite literally, in a snap?

The Basics of Pick Guns

A pick gun is a device that picks locks using a gun-like trigger mechanism, hence the name. It uses the pick blade, or needle, to pick locks by snapping hard into the key pins, causing the driver pins to jump upward. It’s the same way a pool player causes pool balls to move by hitting other pool balls.

The pick gun was invented in the early 20th century for use by police officers and locksmiths for easy lock opening. They use these guns to break into places where criminals might be hiding or stashing something illegal. It gets around the typically time-consuming process of manually picking locks by allowing you to hit all the pins at once instead of slowly and individually setting them with a pick or raking them.

The process of actually using a pick gun, however, is very delicate. You’ll always risk pulling the trigger back too far and damaging the pins in the lock, preventing it from being opened at all, even with the correct keys. You must also apply the right amount of pressure to the tension wrench. Generally, you should know your way around locks before using a lock picking gun.

The Basics of Electric Lock Picks

An electric lock picking gun is like a pick gun, but, as you can imagine, it operates electrically rather than manually. Electronic pick guns vibrate their pick blades to hit key pins much quicker than a manual pick gun.

This vibration allows for more attempts at properly raising the pins. As you are relying on chance and probability to open the lock, the quicker your tool moves results in more tries in a shorter amount of time. The more tires the greater the chance of the lock opening.

Electric lock picking guns hit pins hundreds of times per second as they vibrate the lock. This makes them way more efficient than a standard pick gun, as a pick gun is only capable of hitting the pins as many times as the user can pull the trigger.

Despite how simple this sounds, the process of using an electric lock pick v.s. a manual pick gun takes a lot of skill and practice. It’s not as simple as inserting the device and turning it on. Before activation, you must know the correct setting to get the force you need, or else you risk damaging the lock mechanism or pick. Many beginners leave a trail of metal dust when they first attempt to use an electric lock picking gun.

How to Use a Lock Pick Gun

When the gun is put into the lock, and the needle whacks the key pins, the kinetic energy moves through the key pins and into the upper driver pins, firing them above the shear line and causing the lock to be momentarily turnable. If the tension wrench’s pressure is applied right, the lock will move and then open.

When you pull the trigger on a pick gun, it moves the gun’s needle downwards under spring tension. Once the trigger is back far enough, the piece pulling the spring backward slips, causing the picking needle to quickly snap upwards and hit the pins. Pulling the trigger a certain amount and manually letting go creates the same effect.

Electric lock picks may look and function like sonic screwdrivers, but their internal workings are far from science fiction. They use a motor, much like an electric toothbrush, to vibrate the needle rapidly, causing it to hit the pins hundreds of times a second.

Who Has Access to a Pick Gun or Electric Lock Pick

There’s a possibility of pick guns being illegal depending on your state or country. There may be some restrictions on whether or not you’re able to purchase or own a pick gun or an electric lock picking gun.

Disclaimer: I am not an attorney, and this is not a replacement for professional legal advice. These are the laws as far as I understand them.

Pick guns can be legally considered as burglary tools. Any law that mentions those tools includes both manual pick guns and electric lock picking guns. In most states, ownership is legal as long as there is no intent to commit a crime. The main exceptions are Mississippi, Nevada, Ohio, and Virginia. Owning these tools makes you “guilty until proven innocent.” Generally, only locksmiths and police officers have access.

All lock picking tools are illegal in Japan and Poland. Conversely, most of Europe uses the same system that most of the United States does, meaning these tools are only illegal if you can prove intent to commit a crime.

Pick guns and electric lock picking guns can be bought online by anyone that lives in a jurisdiction where they’re legal. Most of you reading this can probably buy one for yourself, but check your local laws first.

Locks That These Guns CAN’T Unlock

There are several things to consider when securing your door. Some of these considerations lead to a door immune to pick guns. Fundamentally, you can pick all locks, but lock pick guns and electric lock picks only work on mechanical pin tumbler locks. These locks are on a majority of doors, but there are several exceptions.

Combination locks use a vastly different mechanism than pin tumbler locks. They don’t have keyholes, so there’s nowhere to insert the gun. It is still possible to unlock a door without a keyhole through other means, however.

Disc tumbler locks are immune to pick guns and electric lock picks since they don’t use a spring pin system but rather a series of rotating discs. Hitting these with an electronic pick gun would accomplish nothing. Disc tumbler locks are sometimes on residential doors, particularly in areas that have wet climates, as they are more rust-resistant.

Most antique locks were warded locks. These are the locks you think of when you think of old-timey treasure chests or that classic keyhole shape. These are immune to pick guns and electric lock picking guns but can be opened easily with skeleton keys and are generally considered outdated.

A pick gun or electric lock picking gun cannot pick a lock with an electric current. The electromagnetic lock, the electronic lock, or the electric strike lock are types of electric locks. These locks are commonly found in hotel rooms and offices, as well as being the most common prison locks. They’re pretty expensive to install in homes.

Learning how to use a picking gun or electric lock pick involves knowing precisely how much pressure to use for the lock you’re attempting to pick. It takes a great amount of practice, and is not something anyone can easily pick up.

While pick guns can pick locks much more quickly than a typical set of picks, they are not used commonly by thieves. In general, thieves are not well-versed in lock picking.

Most burglaries and thefts occur without locks getting picked at all, as there are more effective ways to commit burglary. A pick gun may reduce some of the time it takes to pick a lock, but kicking down a door is even faster. There are other ways to prevent criminals from kicking in your doors that you may consider.

Pick guns are also unwieldy and hard to conceal, and getting caught with one would look suspicious to most law enforcement. Generally, thieves are not going to have either pick guns or electric lock picks.

How do you use a lock picking gun?

Learning how to use a lock picking gun is a tricky task. Manual pick guns require applying enough pressure to the trigger to allow the driver pins to snap up and unlock the door. It takes some practice to get right, and doing it wrong may damage the lock. You must also apply pressure with a tension wrench while using it.

An electric lock picking gun also requires a tension wrench. The difference here is that the device itself doesn’t use manual pressure. You must still learn how to apply the right amount of tension to the tension wrench, however.

In almost every state, lock picking tools are only illegal if one can prove that the intent to commit a crime was the motivating factor for purchase. Most European countries work this way as well, except for Poland, where they’re outright illegal. They’re also illegal in Japan. In Mississippi, Nevada, Ohio, and Virginia, these tools work on a “guilty until proven innocent” basis, and owning them counts as criminal intent.

How do lock pick guns work?

Lock pick guns work in the same way bump keys work, and therefore also have the same weaknesses as bump keys. The kinetic force used causes the obstructing driver pins to move upward, leaving them no longer obstructing the lock and allowing it to turn. If you want to know how to use a pick gun, you must know these basic principles.

What’s the difference between a manual and electric lock picking gun?

Manual pick guns must be snapped manually and are therefore much slower than electric lock picking guns. Electric guns can snap a lock many times a second using their vibrating motors, meaning it’s easier to succeed in opening a lock.

Can you pick a car door with a lock pick gun?

As lock pick guns work similarly to bump keys, these will not work on car door locks.

Pick guns and electric lock picks are incredible inventions, but they aren’t the solution to every lock. Some locks are inherently immune to them, and they take a lot of skill to learn how to use effectively.

If you have a lock that needs picking, it’s best not to attempt to pick it yourself. Lock pick guns aren’t magic and can’t automatically open any lock you need. If you need a lock picked, you should call a professional.

And if you’re worried that a criminal is going to use a pick gun to break into your house, rest assured that this is an unlikely method of burglary.

What’s your opinion on pick guns and electric lock picks? Leave a comment below!