Pin Tumbler Locks vs. Wafer Locks: Which Lock Is Best? 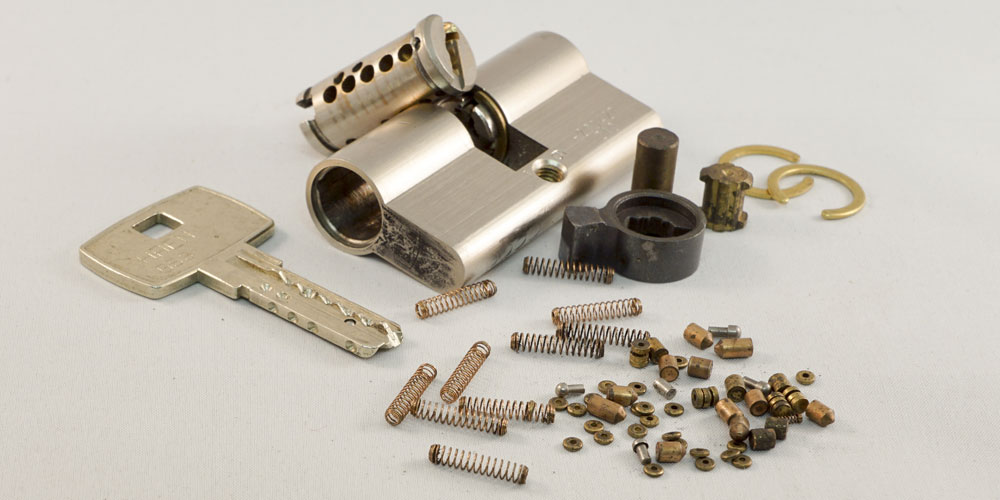 Locks are a significant part of your daily life, even if you don’t always think about them.

An invisible battle is waged in every door: a battle between the thief and the locksmith. Inside every lock is a history of innovation and strategy: how do you produce a cheap and effective product that can also remain elusive to thieves?

As a result, there are many different types of locks on the market. All of these locks are pickable to the determined and experienced lockpicker, but each has its own strategy for keeping people out. They must be built with unique advantages and disadvantages to create the best product.

The most common lock is the pin tumbler lock. If you’ve ever researched locks, you probably know about this one. And you may have also heard about its close cousin, the wafer lock. They’re both built on the same fundamental principle, and as a result, are very similar locks.

So which one’s better? If you’re buying a lock, which one should you go for?

Pin tumbler locks were invented in 1848 by Linus Yale Sr., and since then, they’ve become the most common locks in the world. They’re most likely what you have on your door right now.

They consist of two rows of pins that stack on top of each other. The top pins are “driver pins.” The bottom pins are “key pins” because they interact with the key. As the driver pins rest on the key pins, they block the lock from turning.

When you insert the correct key, it pushes the key pins up to the level where the bottom of the driver pins and the top of the key pins all line up. This creates a gap that allows the lock to turn. It’s a clever design because it means that each pin must be in precisely the right place for the lock to open, no higher or lower. As a result, only the correct key will work.

The Pin tumbler design is based on a much more ancient and rudimentary lock where the pins were shaped a lot like giant nails. Points on the key would push these pins up until the space between the key and pin would leave a gap and allow the lock to slide backward, unlocking the door.

There are several different types of pin tumbler locks. Most are linear and have pins in a straight line. There is also the rarer tubular pin tumbler lock, which has its pins lined up in a circle formation. The keys for these locks are tube-shaped, with teeth (called bitting) around the circle. This makes them harder to pick because most picks are built for straight lines, not circles.

Another rare variation on the pin tumbler lock is the dimple lock. This lock has pins on the side rather than on the top. The keys have small dimples on their sides instead of teeth. These aren’t significantly safer than regular pin tumbler locks; they’re simply slightly harder to pick.

Wafer locks were invented in 1868 by Philo Felter, a while after the first pin tumbler locks. These are less common, although plenty of cars still use wafer locks.

Wafer locks have a series of wafer-shaped rectangular pieces in them. These pieces have smaller rectangles cut into their sides for the key to fit through, leading to a sort of rectangular crescent shape. As the wafers sit, they obstruct the bottom, and the lock cannot turn.

When the correct key is inserted, the wafers are lifted and no longer obstruct the bottom of the lock, allowing it to be turned. They can’t be raised too high, though, or they’ll start blocking the top. Once again, the wafers have to be in the exact right position to open.

Wafer locks are generally less standard than pin tumbler locks, but they are more common in specific contexts. You can find them on a lot of cabinet locks or desk locks. As stated before, they’re also more common on cars.

As you can probably tell, the design of the wafer lock is heavily influenced by the pin tumbler lock. Both fundamentally have the same roots, just with different manufacturing techniques. Philo Felter was definitely inspired by Linus Yale Sr.’s design.

The main two types of wafer locks are single wafer and double wafer. Single wafer locks have wafers in only one direction, so the keys only need bitting on one side. These keys look a lot like pin tumbler keys.

Double wafer locks have wafers on both sides. These keys must have bitting on the top and the bottom. This is probably what your car keys look like.

So why are pin tumbler locks so popular?

As a general rule, pin tumbler locks are safer than wafer. Wafer locks can be raked open much more easily. This means that you can insert a jagged tool called a “rake” and jiggle it around for a bit while applying turning force to the lock, and it’ll open. Pin tumbler locks can also be raked, but it can be trickier.

If pin tumbler locks are so much more secure, why are wafer locks used at all?

It mostly comes down to the fact that wafer locks are significantly easier to manufacture than pin tumbler locks. You don’t need two rows of pins, only one set of wafers, and it’s very cheap to produce a wafer.

There’s also the fact that they’re easier for locksmiths to deal with. When disassembling a wafer lock, you don’t need to worry about small pins that you must keep track of to have the key still work when you put the lock back together. Instead, you have a few wafers that come in one piece.

If you’re more worried about getting locked out of somewhere or your lock getting damaged than you are about break-ins, then wafer locks are a better option than pin tumbler locks. They’re just generally easier to deal with. They’re also cheaper if you want to save money on locks.

This is why wafers are often found on cabinets and desks. These are places where you won’t want to get locked out, and you don’t necessarily need the highest quality lock on the market. It’s better to prioritize convenience and price over security in these circumstances.

Which Lock Is Best?

When it comes down to it, pin tumbler locks are better than wafer locks. They’re harder to pick and more secure, which you’ll usually want your locks to be.

So why are wafer locks still used if pin tumbler locks are so obviously superior? Well, sometimes you really don’t need to spend extra money on extra security.

If you’re buying a cabinet, desk, or some other furniture item, you’re probably not too worried about break-ins. You’re unlikely to encounter a malicious lockpicker going after whatever you’re keeping in these drawers. And chances are, these items are inside buildings protected with pin tumbler locks or other higher security locks.

But what about cars? Wafer locks are pretty standard on cars, right? Aren’t cars the kind of thing that you don’t want to be stolen?

The truth is, there are already other high-security systems installed in your vehicle. These will keep you safe from car thieves on their own.

For example, no one will pick the lock on your car when they can break your window. But if they break your window, the alarm might go off. They could use a slim jim to jimmy their way into your car, but then they might set off the airbag. Even if they bypass all of that and get into the car, they won’t have the ignition key. And modern cars have protections against hotwiring.

Picking wafer locks is much easier than picking pin tumbler locks, mainly because of how easily they can be raked. All you have to do is insert your torsion wrench, apply very minimal pressure, and insert your rake. Jiggle the rake around a little bit, and eventually, the wafer lock should open.

What is a wafer tumbler lock?

A wafer lock uses thin, rectangular wafers instead of the cylindrical pins of pin tumbler locks. These wafers sit in the lock body and prevent it from turning in the same way that pins do, but consist of one singular, large piece instead of multiple tiny pins. This makes them easier to manufacture.

What is a double-sided wafer lock?

For single wafer locks, the keys look much like the keys of pin tumbler locks. You can’t tell the difference until you see the lock itself and look inside for wafers.

A double wafer lock has wafers on both the top and bottom. The key must line up with both of these to unlock the lock. This makes certain types of picking harder to do, although one method, called raking, is still pretty easy.

On the other hand, single wafer locks only have wafers on the top. This means that the key must only align with these top wafers to open the lock.

Pin tumbler locks and wafer locks were both very innovative designs for their time. They are, more or less, variations on the same concept.

Both of them work on the principle of using a piece of metal to block the lock body from turning. The metal can only be moved correctly when the right key is inserted or when the lock is carefully picked.

Despite this, pin tumbler locks are significantly better than wafer locks. They provide generally higher security, even if they have their own vulnerabilities. They may be more expensive or difficult to produce, but this is negligible.

Wafer locks are made for the manufacturer’s convenience. They don’t really make much of a difference in most people’s day-to-day lives, and the only reason you’d buy one is if you’re on a budget.