What Is A Skeleton Key? Separating Fact From Fiction 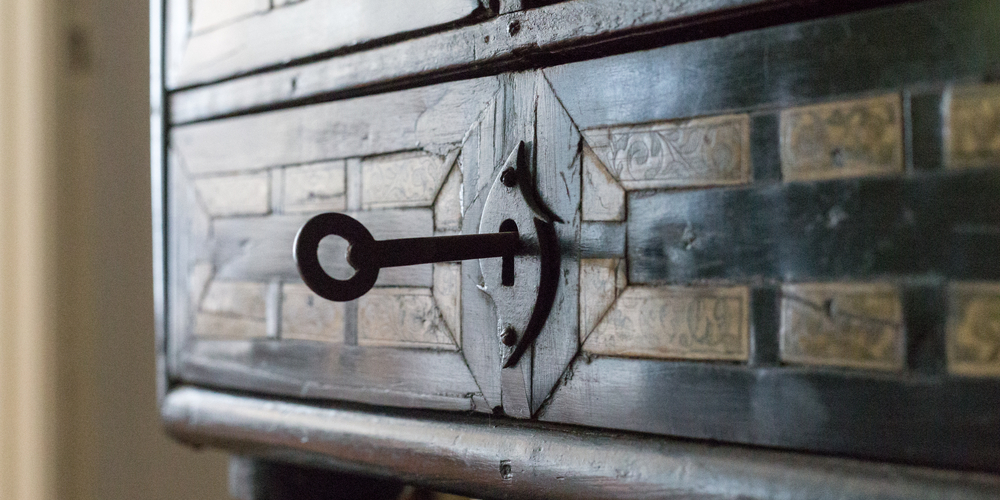 The name invokes images of crafty members of the undead, picking locks with bones and other ghoulish memorabilia, stealing long-lost treasures and ancient gold out of decrepit chests, or escaping from rusty, cobweb-laden jail cells aboard haunted pirate ships.

The reputation of skeleton keys would have you believe that if you had one in your possession, nothing could stop you. You would no longer have to worry about being held back by doors or locks. You could simply pull out your skeleton key and bypass any secret passageway trying to keep you out.

Maybe skeleton keys don’t even exist. They could be as mythical and mysterious as the living dead themselves: a story that we tell to frighten or intrigue with the malevolent, or even benevolent, possibilities, but not something that could exist in real life.

As it turns out, the truth is somewhere in between. Skeleton keys are real, but they’re not these legendary objects capable of opening every lock imaginable. They only work in specific circumstances and on particular types of locks. So what is a skeleton key, exactly?

To understand skeleton keys, you need to know:

1. What Skeleton Keys Are

3. Locks That Skeleton Keys Can Open

What is a skeleton key?

A skeleton key is a key you can use to open some locks without having the real key for them. This allows you to break into places you may otherwise not be wanted. They only work on older or antique lock designs, however. They are, for the most part, useless against modern locks.

Skeleton keys are not actually universal. They only work on outdated lock designs such as the warded lock and some lever locks. On top of that, each skeleton key is geared towards a different type of warded or lever lock. No skeleton key works on every single warded lock.

How do skeleton keys work?

Warded locks have small shapes, or “wards,” cut into them, and only keys with the correct patterns can get past these wards. Skeleton keys have been shaved down to the bare essentials. They can therefore be turned without getting caught in the wards.

What are skeleton keys used for?

Skeleton keys are used to open warded locks when you don’t have the key. Most locks are not warded locks, and typically skeleton keys can only open low-security padlocks or antique locks.

Skeleton keys only work on warded locks. Most modern locks are pin tumbler locks, but most locks predating the late 1700s can be opened with the right skeleton key. There is no single skeleton key that opens every warded lock, however.

What Skeleton Keys Are

So what is a skeleton key exactly? Skeleton keys are keys where the teeth, or the bitting, has been filed off. This strips them down to the “bare bones,” hence the name. It also gives them a long, skinny, skeletal look, which is where many people mistakenly believe the name comes from.

The act of filing the teeth off allows skeleton keys to fit into locks that they otherwise wouldn’t. This is how they bypass security and open multiple different locks.

Skeleton keys date back to the ancient Romans and Etruscans. They invented locks with metal patterns called wards to prevent the wrong key from unlocking them.

Before this, the Babylonians had already invented rudimentary pin tumbler locks, and the Egyptians were using these locks widespread. Despite this, the Roman warded lock became the popular lock for most people in Europe for centuries to come.

It wasn’t long before people began speculating how to get past these locks. Thus, the skeleton key was invented. These keys became something that people were afraid of, and tradesmen worked hard to find workarounds and heighten the security of frightened townspeople from these sly keys.

These days, skeleton keys are easy to buy. However, many things labeled “skeleton keys” are not actual skeleton keys. Sometimes people use it as a catch-all term for old-fashioned keys or barrel keys. Often, antique keys are sold under the name “skeleton key.” Sometimes they’re only decorative and don’t actually work in any lock.

Real skeleton keys are sold in lock shops and online. They are often carried by locksmiths, as you can imagine, to open the locks that they’re designed for, as typical lock picking doesn’t work on these types of locks.

The lawfulness of owning skeleton keys is a bit complicated and depends on the state you live in if you are in the US and the country you live in if you live elsewhere. In most places, these tools are legal as long as there is no proof of intent to commit a crime. The exceptions are Virginia, Mississippi, Nevada, Ohio, Japan, and Poland.

Disclaimer: I am not an attorney, and this is not a replacement for professional legal advice.

Skeleton keys are mainly made for warded locks. Most warded locks work through a unique pattern on both the bitting of the key and inside the lock itself.

These locks have patterns inside them that are the inverse of the patterns on the key’s bitting. The bitting is the part of the key inserted into the lock.

Think of it kind of like a shape sorter toy, with the wards being the various shapes and the box they’re sliding into being the key. You can only put the correct block into each hole, and trying to fit the wrong hole over the incorrect shape will result in the block getting stuck. And with a metal lock, there’s no chance of forcing or warping the hole’s shape and still having it function.

So what is a skeleton key in all of this? A skeleton key can bypass this by not having bitting to go through the cutouts. All it needs is something on the end to turn the locking mechanism. This “something” can change from lock design to lock design. As a result, not all skeleton keys are actually universal.

In the shape sorter metaphor, a skeleton key is essentially getting rid of the wall of the box. You can just dump in any shape you want without it fitting a cutout.

It sounds obvious, right? This was long considered a glaring weakness in warded locks. Some people tried different solutions, like putting more wards on the outside of the lock as well as the inside, but those were eventually bypassed. Warded locks are generally considered not very secure and aren’t used often. If you want to replace or repair your old lock, you can do that.

Locks That Skeleton Keys Can Open

Old and historical locks in Europe typically used warded locks. These were everywhere from the time of the Romans to around the late 1700s. Any locks in the Western world that date from around that time, in all likelihood, use warded locks. If you have an antique steamer trunk, for example, it will probably use a warded lock.

Ancient Chinese locks occasionally used warded bolt locks with a similar mechanism, although this was less common than it was in Europe. The ancient Chinese used different locks in different circumstances: gates had much simpler bolt locks, and locks for personal objects tended to be more complicated.

Warded locks are sometimes used in modern contexts, like low-security padlocks or in hotels that use skeleton keys as master keys. However, most hotels have switched to an electronic master key system. If you have an old home, it may have a rim lock, which uses a warded lock system.

The other lock type that skeleton keys can open is the warded lever lock. These can only be opened by specialized skeleton keys. That figures, as this lock was initially designed to be more secure than regular warded locks.

Lever locks have wards, like warded locks, but they also have levers that must be lifted at the correct height to allow the bolt to move. Lever lock skeleton keys must have a notch on the end that reaches high enough to touch these levers and manipulate them.

Keyholes these days are more complicated than the simple warded lock. Most locks cannot be opened with a skeleton key. They may have been useful back in the day, but what is a skeleton key anymore?

The most notable lock that skeleton keys cannot open is the pin tumbler lock. This is the most common type of lock today and is most likely what you have on your front doors. These locks use a series of pins that must be lifted to the right height to allow the lock to turn. The pins are all different heights, and a key must be cut correctly to lift these pins properly.

As you can imagine, skeleton keys do nothing to these locks. Even if you can fit a skeleton key inside the keyhole, there are no wards to bypass. Turning the key will not result in anything happening to the pins. What is a skeleton key in the face of that?

Pin tumbler locks are the locks used in most residential properties. Many padlocks also use these locks, even the cheaper and less secure ones.

A similar lock is the disk detainer lock, which is also often found on residential properties. These are harder to pick, and, of course, skeleton keys do nothing to them. They work by having disks rotate to the right degree when the correct key is inserted. As skeleton keys have no rotating device, they don’t do anything when put in disk detainer locks.

Locks without keyholes, such as combination locks and electronic locks, are also obviously immune to skeleton keys. This is why many hotels are switching away from a skeleton key system and instead have electronic key cards to open doors. These have their own vulnerabilities, but at least you can’t buy bypasses in a lock shop.

Let’s ask the question again: what is a skeleton key? As it turns out, skeleton keys are not the legendary universal keys that they have been made out to be. They are more or less outdated, just like the locks they open.

No key can bypass any lock imaginable. Rest assured, your valuables can’t be taken that easily. You can sleep well tonight, knowing there are no nasty skeletons out to get you, coming to steal your things and run off into the night.

Then again, if you have a cheap warded padlock, this fear may be warranted. It’s easy to tell whether or not a padlock is warded rather than using a pin tumbler system. If someone with the right tools and the wrong intention were to come across your padlock…

But what are the odds of that?